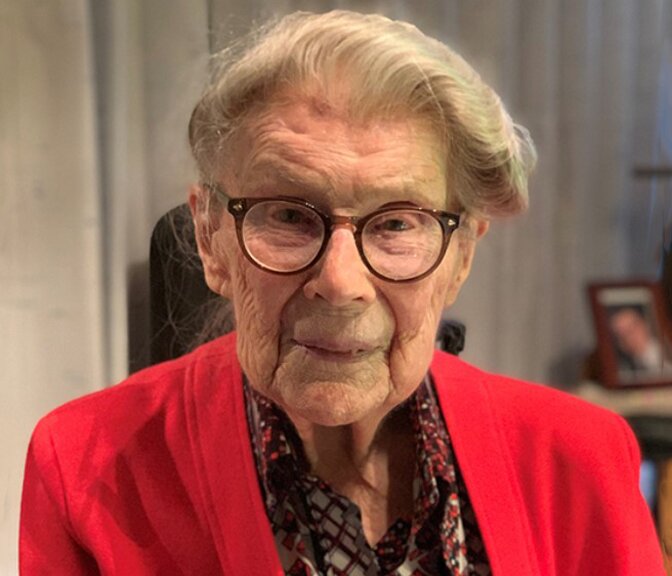 Mary was born to missionary parents in Nanking China on January 9, 1921.  After three years in China her parents returned to the states.  Mary grew up in New England and New York.  She attended Syracuse University where she completed her undergraduate work and then started medical school.  After completing her pediatric residency at Bellevue Hospital and Syracuse Memorial Hospital Mary joined the Army.  Mary worked as a pediatrician in hospitals abroad and in the U.S. for 20 years.
Mary said her favorite place was Landstuhl, Germany, where she was Chief of Pediatrics and the Pediatric Consultant to the Surgeon General of the U.S. Army in Europe.  Landstuhl was also where Mary met and married her husband Col. William A. Collins Jr. M.D.  In 1968 they both were assigned to William Beaumont Army Medical Center in El Paso, Texas where they both retired.
Dr. Mary Collins reached the rank of Colonel and in 1959 was a charter member of the AAP Section on Military Pediatrics, now the Section on Uniformed Services.  According to “Women Doctors in War”, there were fewer than 10 female physicians in the Army and the reserve in 1960.
Mary was preceded in death by her parents, Ella Frances Jones and Herman Carl Steinheimer; sister, Anna Louise Steinheimer; husband Col. W. A. Collins Jr. and step daughter Emma Lou Collins. Mary is survived by her step daughter, Carolyn Wood, and step son, William A Collins III; grandchildren, Elizabeth F. Collins, Katherine Wood, Robert G. Wood, Leslie Rodriguez and Ray Jasik; great grandchildren, Olivia Moore, Antonio Rodriguez, Zack Rodriguez, Zane Rodriguez and Evans Jasik.

Share Your Memory of
Dr. Mary
Upload Your Memory View All Memories
Be the first to upload a memory!
Share A Memory
Send Flowers
Plant a Tree