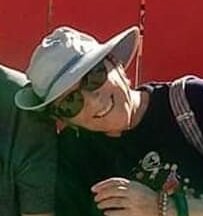 Deanna K. Bird Wise, a spiritual being who was born in human form on December 10, 1951 successfully slipped through the veil between what is known and what is unknown on June 9th 2022 at the age of 70. At the time of departure she was seen off by her sister.Laura Sue Bird, and niece, Pamela Bird. She has become one with creation itself, beeyond body and mind.

She was born in Mankato Kansas to Georgia Lee and Myron Bruce Bird. She spent her early years surviving the pranks of her brothers Myron Joe and Don who would often hold bets as to whether her stroller would stay on it's wheels if sent down the courtroom steps where their father served as Sheriff.

Like her brother Deanna was a born athlete. Participating in Volleyball and Basketball.  She was also a musician, playing clarinet in band and mastering the instrument, only to switch to Trombone because "It was funner to play."

Tragedy was an early acquaintance when, at only 16, she lost her beloved father to a heart attack. While her mother was trying to get her life back in order and still raising Deanna's younger sister Laura Deanna decided to make a life of her own and relocated to California where she was learning sportsmedicine.

Having grown bored of school she moved back to Colorado where she met by happenstance the man she would marry, Gary Wise. They met on Memorial day and were wed on July the 3rd that same year. A year later their first child  Mark was born on June 9th 1975, which was almost the date of her departure into everything. As Mark was being born Deanna recalled hearing the Doctors yell about her pulse and blood pressure and then she remember being surrounded by pure warmth and pure light. It was the most amazing experience she had ever had she later shared with her child Michael. SHe knew she had a kid to raise though so she came back to finish her work.

On November 2nd 1977 her second child, Michael, came to the world. Never content to be conventional, Deanna held many jobs while raising her kids. She sold Avon, held tupperware parties, worked as an aid in a day program for disabled children, umpired softball games, worked at blockbuster and found her calling in the growing world of the internet where she moderated chat rooms and message boards. She always had the ability to 'smile from the wrists down' no matter what kind of mood she was in.

Deanna helped her husband Gary raise funds for a school for disabled children, Bal Swan Children's Center. Their fund raising efforts gave that school a new kitchen, a therapy swimming pool, and enough funds to stay open even to this day.

Deanna could always be found at the local bowling ally, enjoying league bowling with Gary and Laura and Laura's husband Mike. ALways a queen among the lanes, as her sister would say.

Towards the end of her life, before she lost Gary, they would enjoy traveling, always with bowling ball in tow as she participated in the women's invitational tournament for a number of years. WHether it was Reno or San Antonio you could find Deanna, Margarita in hand, enjoying the people watching and having fun.

No services will be held.

In Lieu of Flowers please donate any amount to the Community Food Bank of Southern Arizona.

Remember her as a fierce defender of the powerless and downtrodden. No one who met her will ever be the same.

Share Your Memory of
Deanna
Upload Your Memory View All Memories
Be the first to upload a memory!
Share A Memory