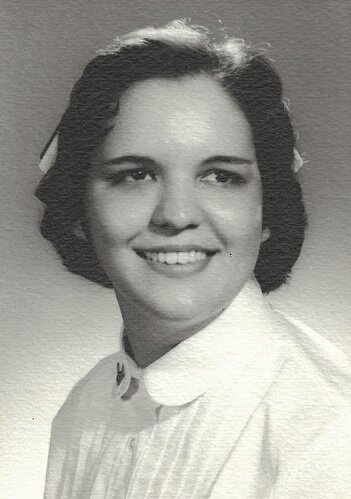 Mildred Herreras Olson was an authentic, adventurous, strong, and caring mother, grandmother, aunt, and friend. A world traveler and voracious reader, Millie also loved helping people, and spending time with friends and family laughing over good food and conversation. However, there were four things Millie was most proud of in this world: being a nurse, serving her country in the United States Air Force, and being a mother and grandmother.

She left us too soon on Friday, March 4, 2022 at age 86. A fourth-generation Tucsonan, Millie was born to Richard and Annie Herreras on March 9, 1935, the youngest of three daughters.

She graduated from Tucson High in 1953, where she played saxophone in the Tucson High marching band. Her senior year, Millie took an entrance exam to attend St. Mary’s Nursing School and earned a full scholarship. Shortly after she graduated, she joined the U.S. Air Force in 1960. Nursing opened the world to her. After becoming a mother, she returned to school to become a Certified Registered Nurse Anesthetist at Baylor University. From there, nursing opened the world to her and her daughter.

They created a rich life of adventure together living in Texas, Louisiana, the Panama Canal Zone in the Republic of Panama, and Germany. In the late ’90s, Millie returned to Tucson to retire, reconnecting with high school and nursing school friends. She was also lucky to have another career in retirement doing diabetes education at St. Mary’s, and cultivating an amazing group of friends in that department. Her faith community at Our Mother of Sorrows was also important to her, where she had a small circle of women friends dedicated to faith and service.

Retirement also allowed her to travel, spend more time creating stained glass projects, jewelry, and quilting blankets for friends and family; as well as volunteering at Casa de los Ninos, the Veterans Administration Hospital, and serving as a docent at Mission San Xavier del Bac, among others. She also helped care for her grandson, an important light in his elementary school years, wowing him with her delicious family dinners, and helping him navigate life and small adventures.

Millie is preceded in death by her mother and father, Richard and Annie Herreras; the love of her life, her husband James Olson; her two sisters and brothers-in-law, Pauline and Ruben Valenzuela, and Ana Marie and James Hutchins, as well as her grandparents, Andres Herreras, Marie Hoffman, and Mary Tisnado Rinehart, and her great grandmother Anita Tisnado Haney.

Share Your Memory of
Mildred
Upload Your Memory View All Memories
Be the first to upload a memory!
Share A Memory