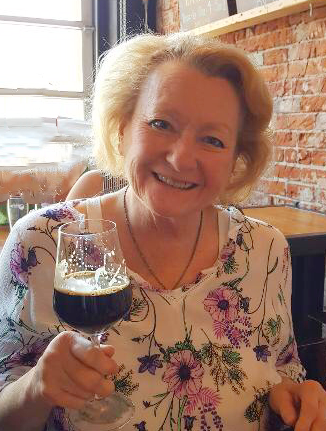 Get Directions
Tuesday
18
May

Patricia “Patti” Gayle Hill, age 64, fell asleep in the Lord on May 8, 2021 in Tucson, AZ after a heroic four-year battle with breast cancer. She was born on May 25, 1956 in Wimpole Park, Cambridgeshire, United Kingdom to Edmund Haefner and Shirley  Gilmore (Fitzner). She is survived by the love of her life of 37 years, former Arizona State Senator Jeffrey Hill, their two children, Gretchen Jackson and John Hill, her son-in-law Darrenn Jackson, her four grandchildren: Nora Jackson, Isabelle Jackson, Evan Jackson, and Vivienne Jackson, her mother, Shirley Gilmore, and her two brothers, Edmund Rand “Randy” Haefner, and Tracy Scott “Scott” Haefner.

As her father was in the military, her family moved frequently until they settled in Arizona in 1968. Patti went to Nogales High School and then graduated from Canyon del Oro High School in 1974. She became a licensed cosmetologist and styled hair for 38 years, owning Exquisite, A Hair & Skin Salon (which was just like Steel Magnolias’ “Truvy’s Salon”) for 29 years, as well as teaching cosmetology collectively for 11 years. She always insisted that her family leave the house with her approved coiffure and was the unofficial backstage hair and makeup artist for all the dancers at her daughter’s ballet recitals.

Patti was a faithful member of the Byzantine Catholic Church. You could depend on her to pray for anything you needed. She especially had a devotion to the Holy Theotokos and the Infant of Prague. Patti was always involved with several ministries at her local parish. From coordinating catechism for the children, to holding a baby to give their mother a reprieve during Liturgy (the vocal babies were a true delight to her during services), to pinching pirohis, to making vats of sauerkraut for the church festival, Patti would joyfully help the parish wherever she could.

Patti was also the biggest fan of the Boston Red Sox, and would have gone to any heights for her favorite baseball team (despite being terrified of actual heights). She and Jeff tried to attend as many Red Sox games at as many stadiums as they could get to (which was nearly all of them, but they were always partial to Fenway). When they weren’t traveling, Patti would cheer them on from her mini Fenway Park den in their home, being quite vocal of their successes and failures. She was certain they could hear her coaching advice through the screen. She was also an excellent Baseball Mom for her son and his various Little League and high school teams. It was practically magical how she managed to get out all the grass or dirt stains from his uniforms.

Patti was the Hostess with the Mostess. She could throw an incredible soiree and was the life of the party. She would cook amazing food and still catch up with all the guests. Everyone always loved her infectious laugh. Patti’s favorite celebration was Christmas. The house, salon, courtyard, and her outfits were decked out with such festive pieces. She would make a gourmet German feast of Sauerbraten, Spaetzle, red cabbage, and cucumber salad. Each year she would add to her collection of Nutcrackers on the mantle and tacky Christmas headbands that everyone had to wear.

Patti enjoyed cruising the beautiful rivers of Europe with Jeff, seeing the sights and taking in the picturesque scenery of the ancient towns and villages. These trips always included a visit to the little German Christmas shops where she would delight in taking home new decorations (see above for her joy of Christmas).

Patti’s love for her grandchildren had no limits. She would tell anyone who would listen about her beloved darlings. The oldest called her Sasha instead of Grandma when she was little and the name stuck. Sasha volunteered at their schools, took them to their activities, fed them copious amounts of ice cream, and always had a little something to give them whenever they visited. She even overcame her distaste for electronics and learned how to navigate video calls to talk to them as often as possible while they lived apart. She was the best Grandma/Sasha anyone could ask for.

A Panachida service (visitation) will be held on May 17, 2021 at 7:00 PM with the Office of Christian Burial & Divine Liturgy (funeral) on May 18, 2021 at 10:00 AM. Both services will take place at St. Melany Byzantine Catholic Church: 1212 N. Sahuara Ave., Tucson, AZ 85712. While we welcome you to attend the services, please be considerate of other people’s health and wear a mask.

In lieu of flowers, the Hill & Jackson family kindly ask that you send a donation to any of the following organizations, which were some of Patti’s favorites:

The Eparchy of Phoenix

Share Your Memory of
Patricia
Upload Your Memory View All Memories
Be the first to upload a memory!