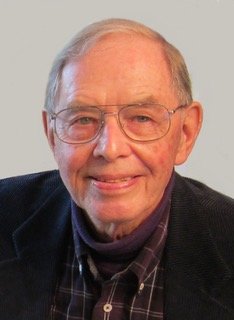 Elton H. Sancken, 93, passed away Tuesday, March 17, 2020 at Elmcroft Assisted Living in Tucson, Arizona. His family will hold a celebration of life at a later date along with a private burial in Cullom, IL. Brings Broadway Chapel in Tucson, AZ, along with Duffy-Baier Snedecor Funeral Home, Pontiac, is in charge of arrangements. Elton was born November 6, 1926, in Saunemin, IL to Theodore J. and Eleanor (Mund) Sancken. He was the youngest of four children, Irma (Richard) Schuler, Paul (Edith) Sancken, and Almita (Herman) Harms. They all preceded him in death. He married Maxine Gleeson in 1947. She preceded him in death in 1992. He later married Bernadette Ahlness in 1994. She preceded him in death in 2015. He is survived by his three children, Pamela Thomson (David, deceased) of Tucson, AZ, Philip (Barbara) Sancken of Seattle, WA, Walter (Kathy) Sancken of Saunemin, IL; grandchildren Matthew (Linda Capotosto) Thomson, Lauren Sancken, Caroline (Jon Roach) Sancken, Katherine (Peter) McBride, Laura (Ben Spalter) Sancken, Alison Sancken, Bradley Sancken; great grandchildren David Thomson and George McBride. Although Elton lived in Tucson, AZ the last five years of his life, he had deep roots in Livingston County. He farmed near Saunemin for many years until opening Sancken and Associates Insurance in Pontiac. In 1975, he opened Sancken Farm and Home Realty with his wife Maxine, which later became Century 21 Realty. His proudest achievements involved giving back to his community. He served on the Livingston County Board for ten years and was chairman for two years, including during the time Grandview USA was filmed. He was a member and chairman of the Good Samaritan Board for many years along with being active in the Pontiac Kiwanis, Elk’s Club of Pontiac and Dwight Lion’s Club. He was a past president of the Livingston County Board of Realtors and received the Realtor of the Year award in 1991. He dedicated a great deal of time and passion to serving his church. He was a member of St. John’s Lutheran Church in Cullom, then later, St. Peter’s Lutheran Church, Dwight, then Tanque Verde Lutheran Church, Tucson, AZ. He served the St John’s Lutheran Church in many capacities, including president of the congregation. The building of the new church building and parsonage in Cullom was one of his proudest moments. In lieu of flowers, memorials any be made to St. John’s Lutheran Church in Cullom

To plant a tree in memory of Elton Sancken, please visit Tribute Store

Share Your Memory of
Elton
Upload Your Memory View All Memories
Be the first to upload a memory!
Share A Memory
Plant a Tree