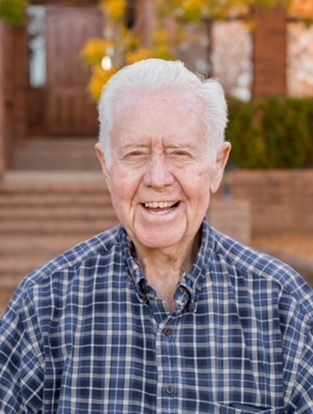 William Leonard Welch passed away peacefully in his sleep in the early morning hours of January 21, 2023 at his home in Picture Rocks Arizona at the age of 87. He was born of goodly parents in Tucson, Arizona on June 15, 1935. From an early age his parents, Ollen Oliver Welch and Myrtle Hardy, impressed upon him love and indelible good attitude towards hard work. His first six years of his life were spent in the Binghampton area of Tucson. His Grandmother and her family were Utah Mormon pioneers who came to the area by covered wagon in 1892. Their last name was Bingham thus the name Binghampton. Bill and his parents moved to Chandler Arizona where he became a farmers’ son and learned his first lessons about hard work. He was baptized in the Mesa Arizona Temple when he was 11 years old. He lived in Gilbert for two years before moving back to Tucson when he was 13. Bill attended Catalina Junior High and Tucson High School where he graduated in 1953 with an emphasis on welding. He attended the University of Arizona for a year before realizing that was not his path at that point. On February 8, 1954 he joined the United States Air Force. He served mostly at Kirtland Air Force Base in Albuquerque New Mexico.

On June 6th, 1954 Bill married Joan Henrietta Weissenburger when they were both only 19. Together they had four children, David, Lois, Anita, and Ginger. In May of 1958 he returned to Tucson where he worked for Midas Muffler Shops. From 1963 to 1966 he sold stainless steel cookware. On May 26, 1963, his first wife Joan unfortunately passed away from complications due to severe asthma leaving Bill as a single father of four young children. On June 2, 1964 he married Janet Marie Goodman in the Mesa Arizona Temple. She immediately became the mother of those four children. Unfortunately, due to prior cancer treatment, Janet was unable to have children. They adopted their final child Lorin in July of 1969 so that Janet could have a baby to raise with the rest of her children. In 1966 he was hired to teach Welding at Tucson High School. He was hired under the condition that he obtain his college degree while teaching. He did so and after ten summers he received his Masters Degree in Industrial Education from Northern Arizona University. During his time at Tucson High, he taught welding, stained glass, metal arts, was adviser to the Vocational Industrial Clubs of America and ran his beloved Scuba Club. Many years of fun and memories were had as he took his family, friends and students on many scuba diving trips to Mexico. In 1979 he established a small welding and custom wrought iron business he named Welch and Sons. He eventually retired from teaching in 1992.

On November 24, 1998 after many years of illness and pain, his second wife Janet passed away. He then met Cecelia Beth Call Orme through LDS Matchmakers and they were married on January 15, 1999. In January of 2001, they were able to fulfil their lifelong dream of serving a fulltime mission in the Island nation of Tonga at Liahona High School in the Church Educational System. While there he built two welding shops, rebuilt a wood shop, and taught welding. He also began the construction of a hydroponics unit for the Department of Agriculture. He affected many lives there as he served as a missionary. He was able to provide the skills to many students so that they were able to be independent and support themselves. After their mission they built their dream home and shop on 4 ½ acres they had purchased in Picture Rocks Arizona. Endless precious hours of love and friendship were spent in that home and shop with family and friends during the time he lived there. They hosted many church gatherings, family reunions, and friends in their home. Bill spent priceless hours working on welding projects and wood projects with his many friends and family in his shop. He did this up until the day of his passing. He was very proud of that place. He was a good man who served and loved those around him. There are a magnitude of people he taught throughout the years that continue to be affected by his goodness. But most of all, Bill Welch was your friend. His happiness was contagious. He was a beautiful soul that lived life fully and joyfully to his last hours.

Memorial services will be held Saturday, January 28, 2023 at 10 a.m. at The Church of Jesus Christ of Latter-Day Saints, 3500 West Sumter Drive in Tucson Arizona. He will be interred at the Binghampton Cemetery in Tucson Arizona. Arrangements are by Brings Funeral Home.

To send flowers to the family or plant a tree in memory of William Welch, please visit Tribute Store
Saturday
28
January