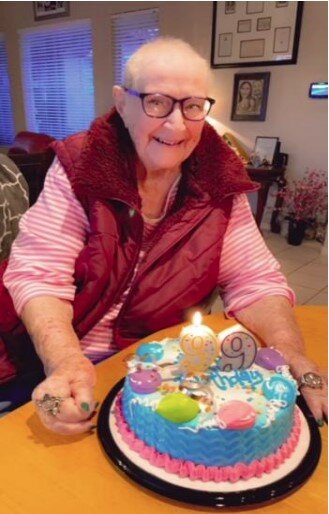 Born on March 21, 1923, in the small town of Oakland, Iowa, to her father, Herbert Tolbert, and her mother Esther Weiss/ Tolbert. She had one older brother named Stanley Tolbert, outliving all three of them.

Sadly, in 1946, on his last flight mission, he was pronounced MIA, never returning home to which Liz became a “Gold Star Wife”. She later then, moved to California where she met her second husband, Donald Commins & gave birth to her youngest son, Jeffery. Liz loved her job, as a Drafter for Lockheed Martin, which she retired from after 33 years. Additionally, she was the first woman hired for that position & department. But that was her! Fierce, strong, and a trailblazer in every aspect of her life! She was the one who would gladly accept any challenge of someone saying “You “can’t” do that”...as to her response, I quote, “Watch me”!

It is difficult to encapsulate the long, fulfilled, beloved life of this incredible woman. She was Superhuman! A sister, a mother, a grandmother, and a great and loyal friend to those of the lives she touched. She was deeply passionate in cooking, painting and ceramics, just to name a few. Liz had that natural gift of she put her mind into. She always wanted to learn or try new things. Even if she wasn’t good at it. She loved having “Bridge” & “Pinochle” tournaments at her home, and taught art classes like oil painting and ceramics . She was an animal lover to her core! She was the rock of our family and will be sorely missed by her loved ones.

She is survived by her loving son Jeff & daughter-in-law Jodi Commins, her two grandsons, Paige and Brandon Commins and her granddaughter, Renee Commins.

To send flowers to the family or plant a tree in memory of Elizabeth Commins, please visit Tribute Store

Share Your Memory of
Elizabeth
Upload Your Memory View All Memories
Be the first to upload a memory!
Share A Memory
Send Flowers