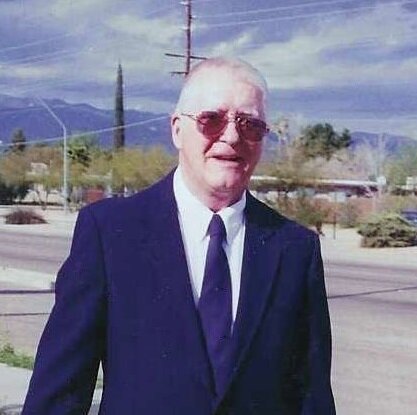 Michael Paul Lein, 79, of Tucson, AZ passed away peacefully surrounded by family at Casa de la Luz Hospice on January 5, 2023 due to complications from COVID. Michael was born on February 14, 1943, in West Allis, Wisconsin to Michael and Ethel (nee Cherney) Lein. Michael was an Air Force veteran and worked as a dispatcher for a transportation firm after receiving his Associate of Arts degree. Michael relocated from Wisconsin to Tucson in 2000 to be near his siblings. His passions were playing bingo at SandRuby (Handmakers), dining with the residents at Oasis in Tucson, and cheering for the Green Bay Packers with his sister Sandy. Michael is survived by his sister Sandy Lein of Tucson, brother Daniel Lein (Cindy) of Kenosha Wisconsin, nephews Ken Johnson, Michael and Jake Lein, niece Christine House (Andy), great nieces Caroline, Cate, and Ellen, his cousin Patricia McKay of Greenfield Wisconsin, his aunt Lucille Cherney of Hartford Wisconsin, and several other beloved family members. Michael was preceded in death by his sister Kathleen Susan and brother Kenneth. A graveside service will be held at a future date at his final place of rest in Kenosha, Wisconsin.

To send flowers to the family or plant a tree in memory of Michael Lein, please visit Tribute Store