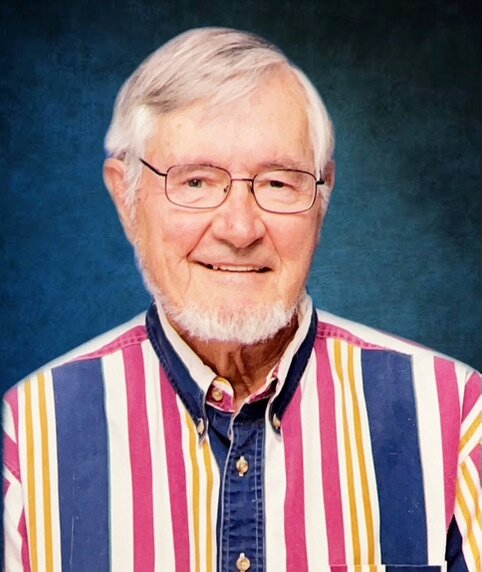 Ray grew up in Leavenworth, Kansas and Omaha, Nebraska graduating from South Omaha High School.  After a couple of years of college with no major decision in sight, he took a “ gap year” (really 3 years), joined the Army and served in the Korean War, where he achieved the rank of SGT.  After being discharged, he completed a business degree at University of Nebraska - Omaha and accepted a job at Bankers Life Insurance Company in Des Moines, Iowa where he pursued a career in systems engineering.  In Des Moines, he met and married his best friend and great love, Nadine in 1957 and began work on a Masters degree at Drake University.  When his Masters advisor did not accept his proposed thesis on computers (because there was no future in computers), Ray and Nadine focused instead on starting and raising a family in Waukee, Iowa.  In 1980, a career move relocated Ray and his family to Tucson, Arizona, a place he and Nadine vacationed, loved, and dreamed of living.  Over the course of the next 40+ years, Ray and Nadine lived and worked in Tucson and Ahwatukee, and finally retired in Green Valley.  In 1997, they built a log cabin in Greer, Arizona - where they spent glorious summers for the next 20 years. Ray was an integral part of the Greer community, leading a coalition to keep Greer the untouched and beautiful area that it was and acting as a docent at the Butterfly Lodge Museum. He was a talented woodworker, producing many memorable pieces and family heirlooms in his garage. Ray loved the outdoors, hiking many trails around Greer and Sedona. He loved to golf and fish; both of these hobbies he shared with his children and grandchildren. He was a man of Faith, always active in church, where he loved to sing in the church choir and held leadership roles.  During retirement, he and Nadine travelled, enjoying Europe, China, Hawaii, Alaska and Central America as well as visiting with their non-Arizonan children and grandchildren.

Ray considered himself a “shy guy”, but he loved to share his wry wit, stories and ditties with his survivors: his wife of 65 years, Nadine, their children, Marcia Faller, Susan Taylor and Mark Stanley, as well as his brother Brian Stanley; 8 grandchildren and 3 great-grandchildren.

To send flowers to the family or plant a tree in memory of Raymond Stanley Jr., please visit Tribute Store
Saturday
14
January

Share Your Memory of
Raymond
Upload Your Memory View All Memories
Be the first to upload a memory!
Share A Memory
Send Flowers