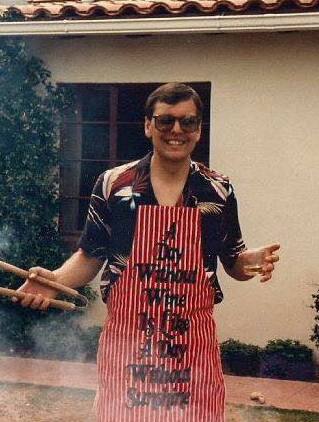 John Lopez Huerta Jr. was born in Tucson, Arizona at University Medical Center on June 6, 1952 to John Lopez Huerta Senior and Nancy Shipman. Nancy went into labor at that days University of Arizona baseball game. Known as “Sporty” to his immediate family and friends he soon become a fixture in the Tucson community, working as a life guard for a local pool and park on the west side, as a soda jerk, in the family grocery store, at their local west side beauty shop, and as a Mariachi for Los Changuitos Feos. He had an ear for music and his band The New Sounds had regular shows covering Rolling Stones songs around town.

With his head up and his heart in his hand he travelled to Paris, France to apprentice with some of the greatest chefs in the country and become a trained sommelier. He was always a greatly independent person. He was adventurous, an explorer. He was always ready for a new challenge, a new opportunity. Always hungry for more. More experiences, more knowledge or wisdom, more books, more laughing and living. John was also long time, long distance runner, a passion he passed on, and shared with, his son.

Of all the words one can used to describe him, the most accurate is passionate. He was driven by deep emotions and an unquenchable thirst for all life had to offer. He worked in the U.S. House of Representatives, met several U.S. presidents and was in a class taught by James Baldwin, all while participating in Vietnam war protests and going to school at The American University for political science. At the same time he met one of his best friends for the rest of his life, and earned his M.P.A. He married for the second time in 1983 to Bobbi Jane Cerny. They produced two progeny, John Lopez Huerta III and Julia Marie Huerta.

He eventually found his way back home to Tucson, starting his own advertising agency, Huerta Marketing Group. John and HMG gained such notoriety he was offered a position at Hillsborough Community College in Tampa, Florida as Vice President for External Affairs.

In his retirement he returned home to Arizona and helped to take care of his ailing parents and support his son’s graduate school career. After a stroke and a bout with kidney and brain cancer his mobility became more limited. He would take a walk around his neighborhood every morning, come home, have lunch and take a nap before watching the news. In early 2022 his cancer came back and had metastasized throughout his body. On July 21st 2022 in the wee hours of the morning he passed away with his son at his side.

Share Your Memory of
John
Upload Your Memory View All Memories
Be the first to upload a memory!
Share A Memory
Plant a Tree