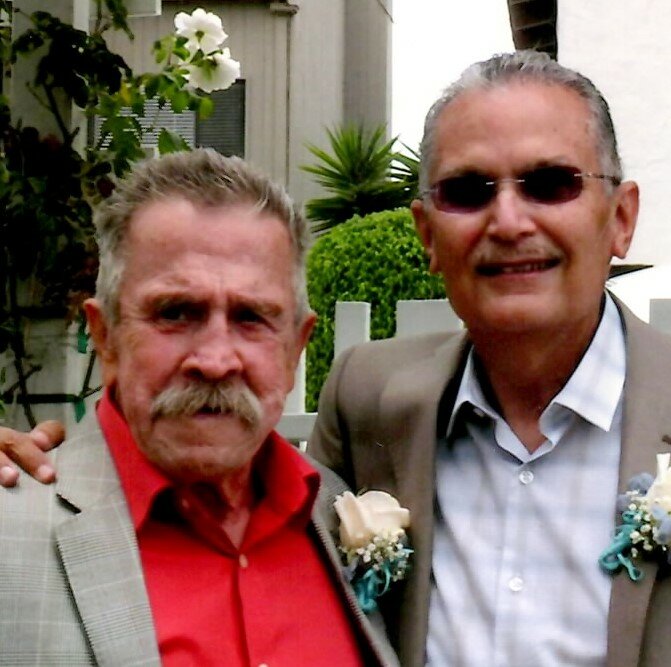 Frederick Clarence Martinez (McQuire) was born on September 17, 1944, in Springfield, Illinois, and passed away on May 3, 2022. He is pre-deceased by his parents, Fred McQuire and Rosemary Page, sisters Carlene Squires and Lenora McQuire, and his life-long partner and spouse, George Garcia Martinez. He is survived by his sisters, Jackie Endres, Susie Leforce, Penny Wiker, and younger brother, Rex McQuire.

Fred was proud of his US Army and Air Force service and was stationed in Guam and Davis Monthan Air Force Base. Fred's approach and understanding of people made him a born salesman at which he excelled. Fred and George owned a bar which became a gathering place for family and friends. As his health deteriorated, he assumed the "house manager" role, caring for the home he shared with George and creating fantastic and "delicious" meals.

Fred and George have a place in history, living their principles and values, committing to each other in 1973, and marrying in California in July 2014. George passed away a month later. The couple was 1 of 19 plaintiffs who filed a lawsuit "to challenge Arizona's constitutionality and statutory provisions" banning and recognizing same-sex marriage. In September of 2014, the US District Court, District of Arizona, ordered that Arizona "recognize the legitimacy of [George and Fred’s] California marriage” and "prepare and issue a death certificate showing that Martinez was married to McQuire when he died." In a separate ruling October of 2014, the court overturned Arizona's ban on same-sex marriage.

Fred is remembered for his delightful choice of words, wicked sense of humor, love of the Dallas Cowboys, ability to rock a cowboy hat, addiction to crime shows, and love for George. He passed away at his home as he wished, talking to George and looking at photos of their life together.

We thank the Tucson Veterans Affairs Home-Based Primary Care Team for the care and caring they provided to Fred and for Lamda's pursuit of righting wrongs in our nation.

Fred will be laid to rest at South Lawn Memorial Cemetery in Tucson on Saturday, June 4, 2022, at 11 AM.

We send our love to you and George. Rest in Peace, Freddy.

Share Your Memory of
Frederick
Upload Your Memory View All Memories
Be the first to upload a memory!
Share A Memory