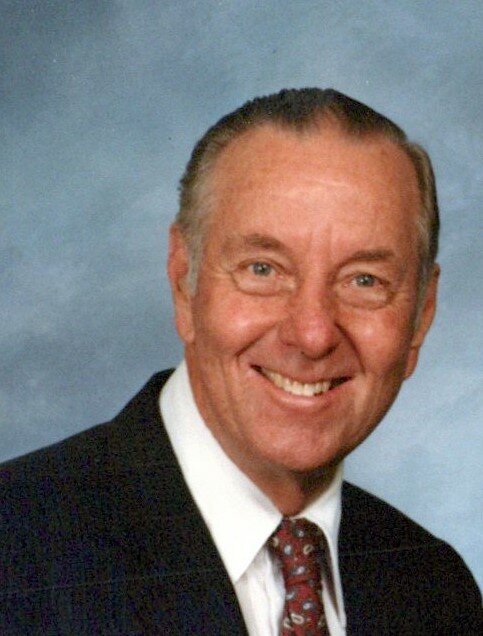 John (Jack) C. Vick was born in Phoenix, AZ on November 13, 1931 and passed away May 15, 2022. His parents were John B. Vick from Rocky Mount, North Carolina and Cornelia (Connie) Thomas Vick from Big Bend, Wisconsin. Jack grew up in Phoenix and graduated from North Phoenix High School (1949), Phoenix College (1951) and Arizona State University (1953). After graduating from ASU, he enlisted in the Army Security Agency. Jack worked at Motorola in Scottsdale and then accepted a job at Hughes Aircraft in Tucson in January 1962. Jack retired from Hughes in December 1989 as Material Manager. He worked at Evergreen Air Center for a short period of time as a Subcontract Manager and Consultant. In 1951, he met Anita Prichard at First Baptist Church in Phoenix, where they married on September 26, 1953. Jack was stationed at Ft. Devens in Massachusetts followed by assigned duty to Wildwood Station, Kenai, Territory of Alaska. Their daughter, Kathryn, was born August 25, 1954. Soon after, Anita and Kathy joined Jack in Kenai. They were there until his tour of duty ended and the family returned to Phoenix. Jack and Anita’s daughter, Karyn, was born December 5, 1967 in Tucson. Jack and Anita were both very active in the churches they attended: Church of the Master, Tucson and Catalina Baptist Church on Country Club Rd. After the closure of Catalina, they joined St. Paul’s United Methodist. He loved teaching the Bible and led many Bible study classes. Jack and Anita most loved singing in the church choirs, and were known for their beautiful voices. One of the highlights of Jack’s life was being able to visit the Holy Land in 1996. Jack was preceded in death by his parents, his loving wife Anita, grandson Kris Lester, and his brother Ralph.   He leaves behind his twin sister Joan Wanless, daughters, Kathryn (Edwin) Lester, and Karyn (George) Frantziskonis, grandchild Kylee (Doug) Mosman, step-grandchildren Jahna and Elias Frantziskonis, great-grandchildren Madelaine Lester, Andrew and Kaiden Mosman, as well as several nieces, nephews and cousins.

Services will be held Saturday, May 21st, 2:00 p.m. at Saint Paul’s United Methodist Church, 8051 E. Broadway. In lieu of flowers, please send contributions to Rainbow Acres: 2120 Reservation Loop Rd, Camp Verde, AZ 86322 The family would like to thank the caregivers and staff at Pacifica Senior Living Tucson for their kind and loving care.

“Like all families on this highway of life we have encountered mountains, valleys, detours, curves and crossroads, and by the Grace of God we have thus far prevailed.” Arrangements by Bring’s Funeral Home.

To send flowers to the family or plant a tree in memory of John Vick , please visit Tribute Store
Saturday
21
May