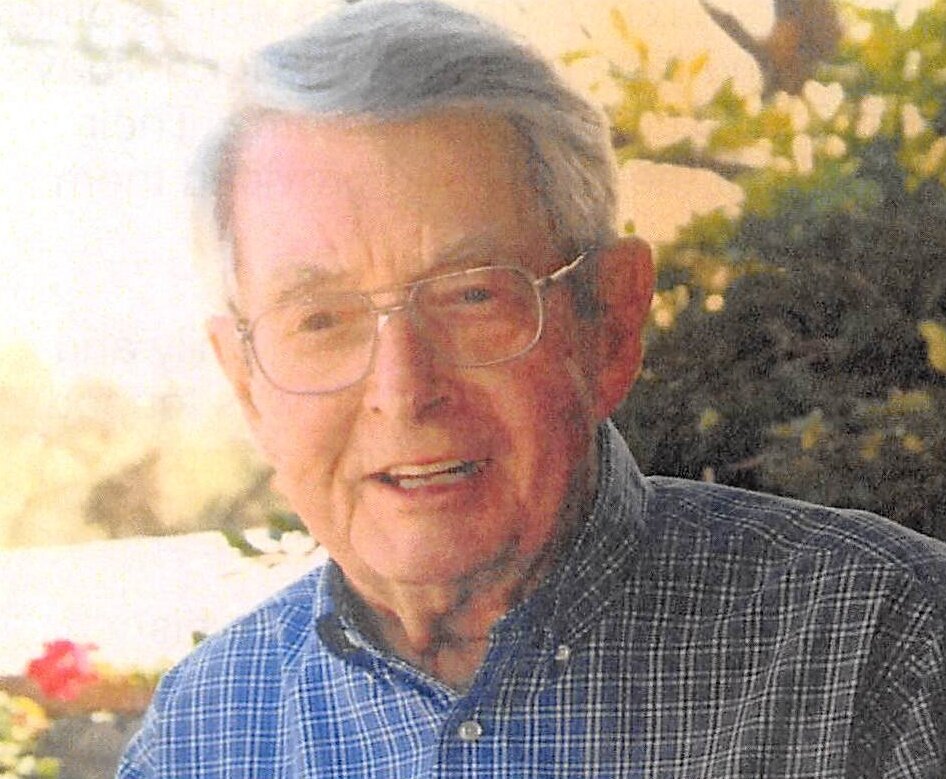 Roy Milks passed away peacefully on April 22, 2022, at his home near Tucson, with his wife and children present. Roy was born in Midland, Michigan, on October 31, 1921 the third of four children of Alfred and Sarah Milks.
Roy grew up in Midland enjoying the fly-fishing, hunting and camping opportunities in the area. He joined the US Army in 1942 and served in an artillery battalion participating in the Allied advance in France and Germany, associated with the Battle of the Bulge, 1944-45, World War II. He received a commendation and a bronze star for his service. After the war Roy attended Michigan State University and graduated with a degree in Geology in 1948. He then began a lifelong career with Mobil Oil company, including exploring for oil in the Permian basin of New Mexico and West Texas. Through his career with Mobil he resided in Wichita Falls, TX, Roswell, NM; Hobbs, NM; Oklahoma City, OK; and finally, Littleton, CO. Roy married in 1951 Helen Nebrig, the mother of his children, who passed away in 1978. In 1980 he met and married the next love of his life, Irma Steder. In retirement, Roy and Irma moved to Tucson, AZ, in 1990. They were faithful members of the Bethany Lutheran Church while residing in Littleton, and members of the Lutheran Church of the Foothills in Tucson and, most recently, Resurrection Lutheran Church in Oro Valley. Roy was a gracious, generous, and sociable family man throughout his life, and was forever a story-teller and joke-teller. He loved vacationing with his family in hometown, Midland, Michigan, where the Milks family stories were tied to the family's rustic camp cabin. Being a geologist, he was often looking for and collecting "funny looking rocks", stopping at road cuts with the kids. He also enjoyed traveling overseas and organized the family's month-long tour of Europe in an orange Volkswagen camper-van. After retirement Roy and Irma volunteered with Mobile Meals. They enjoyed the Westerners Club and joined Elderhostel for tours in different countries, as well as other educational and independent travel. At home, Roy and Irma hosted family for holidays and frequently had friends for social occasions at their Tucson foothills home. Their four-legged friends, Patch and later Daisy, were part of the family and provided them with laughs and unique doggie affection.
Roy was healthy and able to celebrate his100th birthday last October with family and many new friends at All Seasons retirement community. The celebration was topped off by a visit from military veterans from the local fire and police units and a flag ceremony conducted by Post 132 American Legion Honor Guard. Roy is survived by his wife of 42 years, Irma Milks, his sister, Frances Ahlich, his daughter, Deborah Milks, his son, Stephen Milks, and stepdaughters Laura Steder-Myers of San Diego and Linda Maholland of Oro Valley. He was predeceased by his sister, Pat Beutel, and his brother Warren Milks. A memorial service will be held at the Resurrection Lutheran Church, Oro Valley on May 7 at 1 pm. The service will be live-streamed at orovalley.org. Roy requested that in lieu of flowers, memorials may be made in support of the outreach ministries of Resurrection Lutheran Church, 11575 North First Ave, Oro Valley, AZ 85737 or the Salvation Army.

Share Your Memory of
Roy
Upload Your Memory View All Memories
Be the first to upload a memory!
Share A Memory