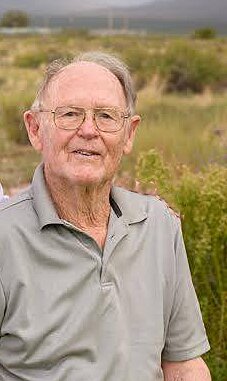 Daniel Preston Owen of Tucson, Arizona passed away on Thursday April 21, 2022, at the age of 95.  Daniel was born in Hayden, Arizona on August 21, 1926 to father Preston Owen and mother Myrtle Brewster, the younger of two sons.  Growing up in Hayden he enjoyed music which would become a lifetime passion.  Throughout his life he played the trumpet and the saxophone in dance bands and other musical groups including the Los Delgadillos and the Old Pueblo Brass Band.

At the age of 18 he was drafted into the U. S. Army and served his country during World War II assigned to the Infantry Regiment.  At the end of the war he attended Farragut College and Technical Institute located in Farragut, Idaho.  Following college a job opportunity became available with El Paso Natural Gas Co. and he relocated to El Paso, Texas. It was here that he met Iris Kirkland on the steps of the church house.  They were married on November 29, 1948 in the Mesa Arizona Temple.

Daniel’s life revolved around his family, his service in the Church of Jesus Christ of Latter Days Saints including serving two full time missions: one to Frankfurt, Germany and the other to Orlando, Florida, his love of music, flying his airplane, and speaking several languages.

Daniel was preceded in death by his parents, his wife Iris Kirkland, son David Owen, his brother Jack Owen, and granddaughter Lisa Ballard.  He is survived by his daughters, Pam Bennett, (Clint), Paulette Ballard, (Mike), and Daniece Richins (Kenneth).  He leaves behind 13 grandchildren and 22 great-grandchildren.

A visitation for Daniel is planned for Saturday, April 30, 2022, from 10:30 am to 11:30 am at the Church of Jesus Christ of Latter-Day Saints Fairmont Chapel located at 6150 E. Fairmont St. Tucson, Arizona The funeral will follow immediately at 11:30 am. Interment with military honors will be at the Binghampton Cemetery, Tucson Arizona.  All are invited to attend.

To send flowers to the family or plant a tree in memory of Daniel Owen, please visit Tribute Store
Saturday
30
April

Share Your Memory of
Daniel
Upload Your Memory View All Memories
Be the first to upload a memory!
Share A Memory
Send Flowers