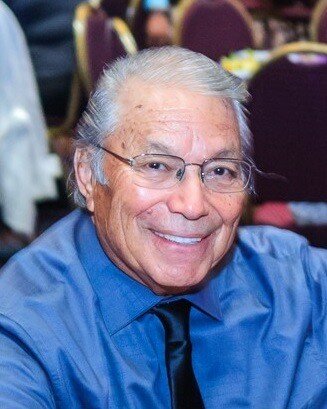 Joseph R. Calderon of Tucson, Arizona passed away at his home on April 15, 2022 at the age of 83 with his family by his side.

He was born and raised in Tucson to Joaquin and Fidelia (Ramirez) Calderon. At a very young age he learned about hard work, dedication, and family. These ideals would see him through an amazing and worthwhile life.

Joe served his country in the United States Army in a Missile Battalion on the East Coast during the Cold War. He graduated from Pima College, went through an apprenticeship in the Arizona Pipe Trades and became an industrial pipefitter and lifetime loyal member of Local Unions #741 and #469. Later in life he had the pleasure of working for the city of Tucson.

Beyond his professional accomplishments there were always more projects at home, ideas to share, or more importantly, people to help. But the things he never forgot were his friends and family, and his greatest impact was on all of us. This nature he inherited from his parents; remember your community and your duty to those around you. Even at home, we can all recall the tireless man working on something on the car or house. His family was very important and very special to him, and the love and wellbeing for his family and proudness he felt for them. His faith in God was strong and important to him till the very end.

He is also preceded in death by his brothers John and Jake, sisters Rita, Lillian, Theresa, and Mary.

A Visitation will be held Wednesday, April 27th, from 5:00 - 9:00 p.m.  with a Rosary at 7:00 p.m. at BRING’S Broadway Chapel, 6910 E Broadway Blvd, Tucson, AZ.   A Funeral Mass will be celebrated Thursday, April 28th at 10:00 AM at Our Mother of Sorrows Catholic Church, 1800 S. Kolb Road, Tucson, AZ, followed by the burial at Holy Hope Cemetery, 3555 N. Oracle Rd, Tucson, AZ.   The family would like to thank the staff of Casa De La Luz for the thoughtful, compassionate, and excellent care they provided their father.

To send flowers to the family or plant a tree in memory of Joseph Calderon, please visit Tribute Store
Wednesday
27
April

Mass of The Resurrection

Share Your Memory of
Joseph
Upload Your Memory View All Memories
Be the first to upload a memory!
Share A Memory
Send Flowers
Plant a Tree