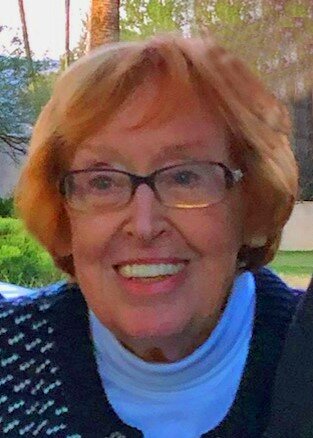 Born July 3, 1932 in Manhattan, NY to Eleanor Sullivan Tiernan and John Francis Tiernan. Married Lt. John A. "Jack" O'Brien in May 1955 and enjoyed a sixty-three-year partnership. Twenty-one of those years were spent as a supportive Marine wife, which afforded Peg the opportunity to move often and raise children mostly on her own! In retirement, Peg and Jack created wonderful memories cruising and traveling the world, not least among them circumnavigating the globe.

A proud graduate of St. Vincent's Hospital School of Nursing in NYC, in 1955, as the tallest red-haired student at St. Vincent's, she was front and center carrying the school's banner in the city's St. Patrick's Day Parade. When the family settled in Tucson in 1976, for Jack to attend law school, Peg returned to nursing at St. Joseph's Hospital. While working at St. Joe's she obtained her BS degree and developed lasting friendships with her fellow One North nurses. As a lifelong caregiver, Peg volunteered with numerous organizations including: the Officers' Wives Club, Navy Relief, Crisis Hotline and the St. Francis de Sales Requiem Choir.

Peg is survived by her children, John, Deirdre (Gregg), Kevin (Trish) and grandchildren, Katherine, Brendan, Ian, Conor (Molly), Meg and Clare. She is also survived by her cousins, Joseph (Barbara) Sullivan, Cecilia Murray, Gale Corcoran; sister-in-law, Ann O'Brien; her niece and many nephews as well as her oldest and dearest friend since 1946, Joan Gordon.

Share Your Memory of
Marjorie
Upload Your Memory View All Memories
Be the first to upload a memory!
Share A Memory