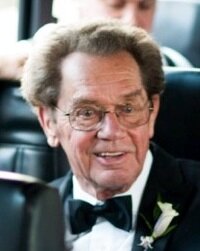 NELSON, Maynard Leo, 84, of Tucson, passed away on February 11, 2022, surrounded by his family. Maynard was born on January 8, 1938, in Elmore, MN. He was a beloved husband, father, and grandfather. He served in the U.S. Marine Corps and graduated from the University of Minnesota at Mankato with a B.S. in Economics. He worked as a computer programmer and systems analyst, and later as a timber buyer. He was an accomplished furniture maker, wood and gem carver, all of which were self-taught. He is survived by wife Noreen (Tucson), sons Christopher (Lino Lakes, MN) and Dale (Washington, D.C.), siblings, Doris Towsley (Omaha, NE), Gordon (Wenatchee, WA) and Wayne (Faribault, MN) , grandchildren, Jackson, Sarah, Ellie and Leah, and numerous nieces and nephews. In lieu of flowers, memorials may be made to Peppi’s House Hospice, the Marine Corps Scholarship Fund and Disabled American Veterans. Funeral Service will be held on Friday February 25, 2022 at 9:30 Am at BRING’S Broadway Chapel 6910 East Broadway Tucson, Arizona 85710.  Burial immediately following in the Southern Arizona Veterans Memorial Cemetery Sierra Vista, Arizona.

To send flowers to the family or plant a tree in memory of Maynard Nelson, please visit Tribute Store
Thursday
24
February

Share Your Memory of
Maynard
Upload Your Memory View All Memories
Be the first to upload a memory!
Share A Memory
Send Flowers
Plant a Tree