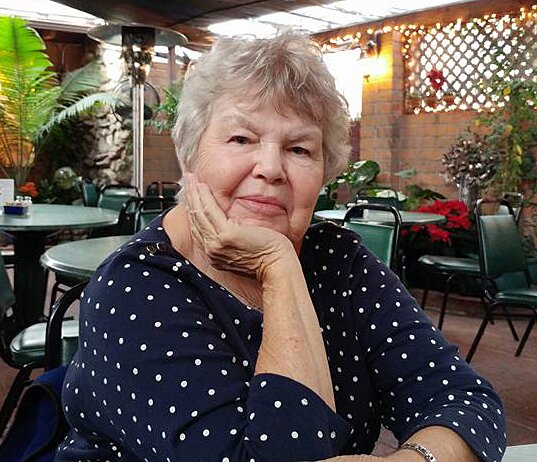 Madeline was born on January 1, 1935 in the borough of Staten Island to Mr. and Mrs. James Fallon Harkins.  She was the first baby girl born in New York City in that year. She attended Curtis High School, Class of 1953, and married the love of her life, Robert Joseph “Bobby” Zimmermann of Brooklyn on September 25, 1954.

Four of their children were born in Staten Island, with the youngest being born in Wilmington, Delaware after transferring there in 1961. She was the “mom” of every kid in the neighborhood that grew up in Brookmeade II. Hers was a home where every child was welcome and treated as one of her own. She was a great baker. The neighborhood kids always enjoyed her homemade cupcakes, cookies and pies. She baked a special pie for every holiday. She was also a wonderful seamstress and made many of her own and her daughters’ clothes as well as outfits for their Barbie dolls.

She loved very small airplanes, the ponies, amateur photography and swimming.  One of her favorite opportunities was the annual Ninety Nines event, where anyone could fly for a Penny a Pound.  The Ninety Nines are a female group who came into existence in 1929 and continue today promoting women pilots. Fully dressed for the elements, it would cost her under a buck and a quarter to leave her 5 kids and go fly in a small two-seater. She had a dash of daredevil in her. When one of her family members, still a teenager, bought a motorcycle, she was the first one to put on a helmet and go for a long ride on the backseat.

Safe to say that few things inspired her more than the Triple Crown winner, Secretariat. Madeline was never one to gamble but after Secretariat’s extraordinary set of races in 1973, our mom was never the same. We all had to annually phone, email and later text our votes on our choices to win, place and show for each of those 3 races. We will probably continue this long streak in May when the top thoroughbreds again Run for the Roses. Why horse racing? For us, her love for Secretariat was simple to understand, they both had hearts 3 times bigger than normal.

Baseball great, Jim Palmer learned of her love for amateur photography. While he was playing in a local charity golf event, he walked over to the ropes where she was standing and asked, “You got enough pictures?!” The shoebox filled with pictures and negatives of what she alleges is him is a family heirloom, as are her scrapbooks of our youth filled with photos of her thumb, some of our shoes, blurred scenery, empty skies and of course, unrecognizable pictures of each our school events. As for her swimming, she rejected early all notions of following the big wide black stripe on the bottom of any swim lane.

She was a stay-at-home mom until 1972 when she re-entered the workforce for WSFS Bank and later, First National Bank in Wilmington. In 1980, with their youngest child out of high school, she and Bobby transferred to Tucson, AZ to be closer to Bobby’s brothers. They built a house on 7 acres of land and lived there until Bobby’s death on January 8, 1991. Madeline quickly found work as a teller in her new town at what is now Washington Federal Bank in Tucson. She loved the bank and her work friends but very much disliked the constant robberies with guns pointed at her head. However, she refused to quit and continued to work there until retiring at the age of 70 years old.

Madeline was a lifelong student, interested in almost everything. She read, watched and retained all that piqued her interest which included current events, history, sports, art, culture, films and particularly, British dramas and comedies. She was devoted to her Catholic faith and was an active parishioner. She enjoyed traveling and especially enjoyed visiting her sons in California and riding the “Polar Express” in Williams, AZ with her grandchildren. She loved traveling to see California, Oregon, Washington, Montana.  She always had thrill when visiting cities like Chicago.

She loved the great moments with her children and their families like her summer trips to Tawas City, Michigan with June (daughter) and Roy, celebrating her own 75th birthday with most of her family over a week in Stone Harbor, NJ or her pilgrimage to Ireland with her daughters and granddaughter. She had a great laugh in Seattle while trying to catch a good size salmon thrown at her in Pikes Place Market with Jon (brother-in-law), Ric (son), June and their families. She looked forward to her trips back to New York to visit her nephews T.J. (Carol) Harkins and Patrick Harkins whenever she was on the East Coast.

She amazed everyone that at her age, she was effortlessly downloading apps to watch streaming TV, texting and emailing her children multiple times daily. She never missed sending a card for every occasion to her children, grand, great-grand and godchildren, family and friends. Her best friends from high school and bridesmaids at her wedding, Myra Stiansen and Marion Thomson remained her lifelong friends. Her good friend, neighbor and savior, Judy Hodges was always there for her as well.

In lieu of flowers, her family suggests a donation in Madeline’s name to one of her favorite charities:  The Fisher House, which provides shelter free of cost to military families and veterans or the ASPCA due to her love for all animals.
The Fisher House: https://connect.fisherhouse.org/index.cfm?fuseaction=donate.event&eventID=609

To send flowers to the family or plant a tree in memory of Madeline Zimmermann, please visit Tribute Store
Saturday
19
February

Share Your Memory of
Madeline
Upload Your Memory View All Memories
Be the first to upload a memory!
Share A Memory
Send Flowers