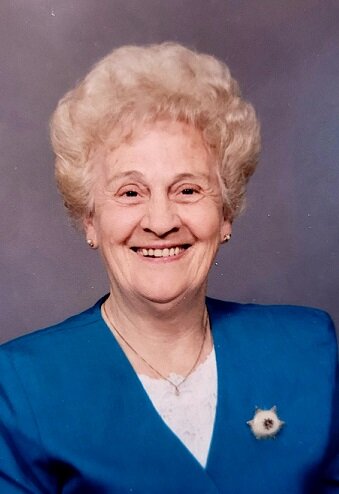 During WWII, Edna met and married Wilfred LaBrie. They started their life together in South Dakota and eventually moved to Tucson. Wilfred took a job with the railroad and they lived in a caboose in Needles, California. Mom always said he had taken her to “the end of the Earth”

Finally, they settled down in Tucson and started their family. Mom began working at the U of A’s Student Union in 1962 after becoming a widow. Being a lover of sports, she enjoyed conversing and serving meals to the U of A athletes.

Mom was a very active member of the Daughters of the British Empire and the Tucson Women’s Club. At the age of 90, she moved into Fellowship Square and kept active participating with the Villa Voices and playing Bingo and Bunco. Her mantra was “I do enjoy my sports”, specifically her U of A Wildcats, Arizona Diamondbacks, Golden State Warriors and Phoenix Suns. She especially enjoyed going to the U of A Women’s Basketball games.

She has been an amazing mother and grandmother. Her laughter and bright smile will truly be missed by all her friends and family.

She is preceded in death by her husband Wilfred, daughter Ileen Sasiadek (Ron) and all her brothers and sisters.

In lieu of flowers, please feel free to donate to the U of A Campus Pantry or to your favorite local children’s charity.

Our family wants to express our sincere appreciation for the compassionate care given to Mom at Tucson Assisted Living Retreat and Soulistic Hospice.

To send flowers to the family or plant a tree in memory of Edna LaBrie , please visit Tribute Store
Sunday
16
January

Share Your Memory of
Edna
Upload Your Memory View All Memories
Be the first to upload a memory!
Share A Memory
Send Flowers