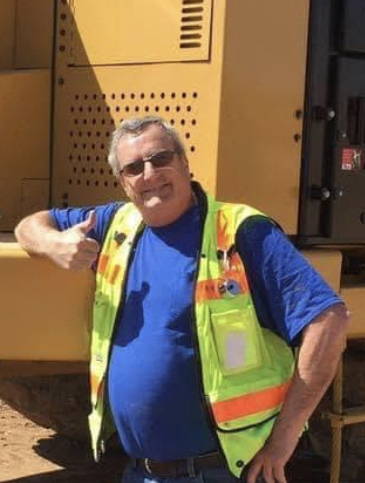 Richard “Papa” Peed passed away at the all too early age of 65 on November 30, 2021 in Tucson, AZ with Edda, his wife of 44 years, at his side and surrounded by his children.  If you’re not sure whether or not you ever met Rich then the chances are you had not.  Full of wit, life, and, well…BS., the outpouring of support following his death has reverberated one thing: he was a great man.

Rich was born in Fort Dodge, IA to John and Delores Peed (both deceased) as the sixth of seven children.  He spent his childhood in the Fort Dodge area graduating from St. Edmond High School.  He married the love of his life Edda in March of 1977 and the two never stopped loving one another.

Rich and Edda moved to Las Vegas where he was a member of the International Union of Operating Engineers. He later started Heavy Equipment Remanufacturing Corporation (HERC) with his father before relocating back to Webster City, IA.  He then used the trucks and trailers from HERC and transitioned into heavy haul trucking before finally moving to Tucson to work at the Caterpillar Proving grounds. Rich returned full circle and entered back into the International Union of Operating Engineers where he served Locals 3, 12, and 428 over the course of his two stints as an operator.

Pro Deo et Patria: for God and Country.  As a young man attending Catholic Schools, Rich had a lot of memories of the troubles he gave the nuns at the time.  He liked to share the story of one that told him, “If you don’t change your ways, you’re going to end up digging ditches your whole life.” He always joked that if he knew how much that paid, he would’ve quit school and joined the Operating Engineers a lot sooner.  As a member of the St. Thomas Aquinas Parish in Webster City he volunteered as an usher, served as school board president, served on parish council, and served as a member of the Archdiocese of Dubuque School Board. He was a member of the Knights of Columbus and became a Fourth Degree Knight.  Members of this degree have the special honor of holding the title “Sir Knight”.  Rich never turned down a round of golf or a long dusty side by side ride with family and friends. Many that knew him also knew he was famous for his mega batch of spaghetti and meatballs.

His true calling in life was being a Papa and his nursing staff all commented that the pictures with the grandkids definitely gave him the biggest smiles. Papa is adored by his 9 grandchildren who see him as not just Papa, but a buddy they could play with. Rich moved onto an eternal life with his lord and savior leaving his family waiting to meet again which includes his wife Edda, son Nicholas and his wife Allison and their children Hudson and Brooklynn, his son Matthew and his wife Lindsey and their children Easton and Olivia, his son Jonathan and wife Jennifer and their children Timothy and Peyton and his daughter Rachael Beebe and her husband Kevin and their children Nora, Harper, and Westen. Rich is also survived by his siblings; Thomas (Rhonda), Jerry (Julie), Mary Ann (Mark) Salsberry, and Kathy Gustafson (Bert Anderson) and his mother-in-law Wilma Mauch as well as many other in-laws, nieces, and nephews.

He was preceded in death by his parents, two of his older brothers Dennis and Joseph, and his Father-in-law Ed Mauch.  Funeral services will be held Tuesday, December 14th, 2021 at 10am at Corpus Christi Catholic Church in Tucson, AZ.

And for all those that knew Rich know very well that we’ll have “just one more”.

To send flowers to the family or plant a tree in memory of Richard Peed, please visit Tribute Store
Tuesday
14
December

Share Your Memory of
Richard
Upload Your Memory View All Memories
Be the first to upload a memory!
Share A Memory
Send Flowers
Plant a Tree