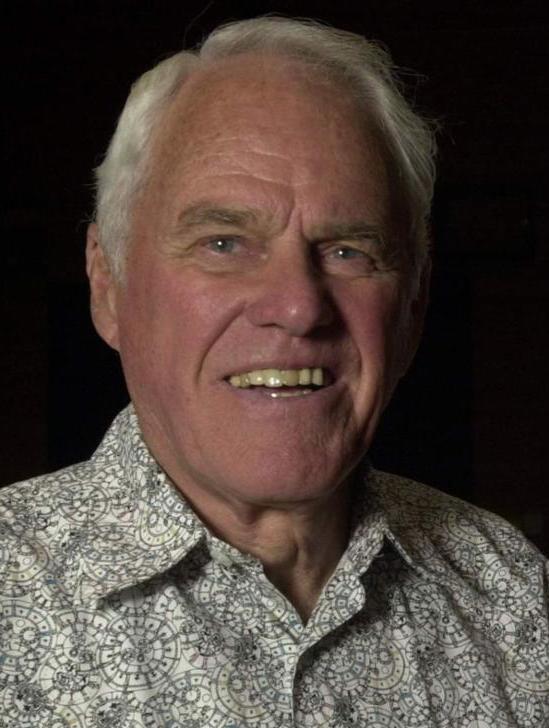 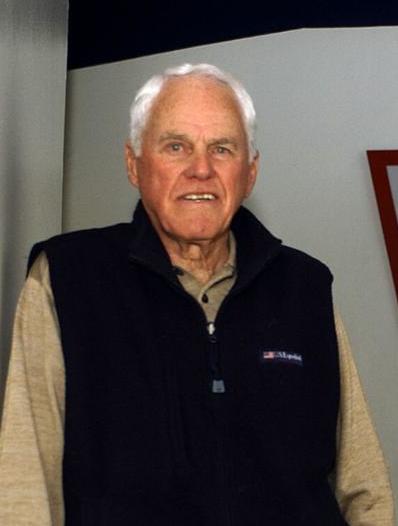 Bruce was born in Fargo, ND the oldest child to Oscar Lewis Larson and Vivian Chilsted Larson. Bruce grew up a very active boy loving all sports especially baseball, basketball, and hockey.  In addition to his love of athletics he has fond memories of playing games with friends including grabbing the bumpers of unsuspecting motorists to slide along the ice and snow. Bruce’s mother was the superintendent of their church Sunday school and didn’t allow participation in the city church basketball league each week unless they had attended class.  Bruce always made sure he was at church so he never missed a game!

Bruce’s passion for sports continued throughout his life. After high school graduation he entered the Navy and served from 1944-1946. Even on active duty in WWII, he played baseball and basketball on service teams. While stationed in San Diego one of his navy buddies suggested attending the University of Arizona.  Bruce enrolled and played baseball and basketball for the Wildcats. One of the highlights of his playing days was going to the NIT and playing before a packed house at Madison Square Garden. He graduated in 1950 with a degree in physical education and then continued his studies at Northern Colorado University where he earned a master’s degree. During summer breaks, Bruce played semi pro baseball in the midwest, having the opportunity to bat against Satchel Paige. Of that experience he said, “I never even saw the ball!”.  At the end of his final season he received a phone call from James “Pop” McKale, the former U of A athletic director who had been his baseball coach informing him of a position at Eastern Arizona College in Thatcher, AZ.

At EAC Bruce became the athletic director, head basketball coach, head baseball coach, assistant football coach, while also driving the bus, groundskeeping, and washing uniforms. He taught botany, anatomy, first aid and a zoology lab.  It was in that zoology lab where he first met Betty Jane Bryce, a young coed who became his wife several years later.  Bruce and Betty married on June 6, 1956. In 1957 Bruce was offered the head basketball coaching job at Weber State junior college. Bruce coached at Weber State two years making it to the National Junior College Championship game both seasons winning the national title in 1959. Bruce returned to his alma mater in 1959 as an assistant to coach Fred Enke. He became UofA’s head basketball coach from 1961-1972.

After coaching Bruce continued at the university as an associate professor in physical education where he had a positive and lasting influence on the many young people who have made teaching and coaching their own careers. Bruce’s extensive sports knowledge and love of the Wildcats led to an unexpected opportunity as a TV analyst. He covered men’s basketball, baseball, and football for many enjoyable years. Bruce’s genuine and warm demeanor not only endeared him to athletes, students, and sports associates but people everywhere. He led basketball camps and clinics throughout Arizona, in Mexico City, Hermosillo, San Carlos, Chihuahua, and as far away as Okinawa, Japan.  Bruce’s infectious personality and enthusiasm made him a favorite of both young and old. He began a charitable youth basketball camp the summer he stopped coaching. This became an annual event extending 40 years that allowed him to coach his children, grandchildren, nieces, nephews and hundreds of youth. Many of these same campers then sent their own children and previous college players sent their grandchildren.  His coaching influence spanned generations and allowed him to connect with so many. He was truly ageless. This ability to connect with people is what made him so special.  He was humble, easy going and cherished lifelong friendships. He looked for and saw the good in everyone. In “retirement” he enjoyed years of weekly golf games at Tucson’s many municipal courses with treasured colleagues often bragging about his “winnings”.  He scheduled the remaining activities of his life around his Tuesday golf. His handball/racquetball matches also continued into his late eighties often against opponents decades younger.

Bruce loved family above all else and family traditions were especially important.  Some of his favorites included Minnesota lake time, Thanksgiving at the Gila Valley farm, snow ski trips, family games, Scandinavian heritage, and Rosa’s Mexican Food at every opportunity.

Bruce had great faith and a testimony of Jesus Christ. This was evident in the way he lived his life. He recognized the strength that comes from emulating the Savior. He was a faithful member of the Church of Jesus Christ of Latter-Day Saints and served in numerous ways.  Bruce is survived by his children Brenda (Steven), Brian (Katy), Becky (Carsten), and Brock, brother Dale Larson and sister Joyce Larson Henderson.  Bruce is preceded in death by his sweetheart of 61 years Betty Bryce Larson, and his oldest son Brett (Lorraine).  His legacy includes 21 grandchildren, 13 great grandchildren as well as countless individuals all striving to live by his adage and example to “keep moving”. Visitation Friday, April 23, 6:00-8:00 p.m, at the Church of Jesus Christ of Latter-Day Saints 6901 Kenyon Dr. Funeral service Saturday, April 24, 10:00 am at the same location. The service can also be viewed online at http://mywebcast.churchofjesuschrist.org/tucsonarizonaeaststake Please note that the webcast will not be activated until 9:55 am. Arrangements Bring’s Broadway Chapel.

Gifts in Bruce’s memory may be made to Eastern Arizona College at eacalumni.org/donate.

To send flowers to the family or plant a tree in memory of Bruce Larson, please visit Tribute Store
Saturday
24
April

Share Your Memory of
Bruce
Upload Your Memory View All Memories
Be the first to upload a memory!
Share A Memory
Send Flowers