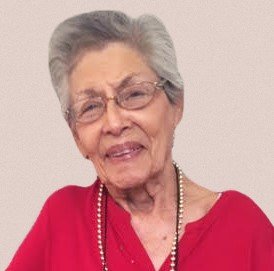 Olga Guiomar (Gonzalez)Tafolla passed away peacefully surrounded by the loving voices of family in Tucson, Arizona on September 4, 2020. She would have been 98 on October 14, 2020.

She is preceded in death by her parents Eulalio and Adela Gonzalez, her sister Omega De La Zerda, and her husband of 59 years, Lott E.Tafolla.

Olga was just 19 when she married the love of her life, Lott E. Tafolla. Lott was inducted into the Army to serve in World War II.  He went to California for training within days of their marriage and soon shipped out to go overseas. Lott made it home from the war. In gratitude Olga promised our loving Father she would always serve Him.

Olga and Lott were active members at La Trinidad in San Antonio,Texas. There, they brought up their daughters to know God’s love through the nurturing of that faith community. Olga taught kindergarten at the Wesley Community Center in the heart of the inner city in San Antonio. There began her passion for teaching kindergarten children. That experience deepened her love of children and led her to teach Sunday School kindergarten  at every church where she was a member.

Olga loved the Lord, her church, and her family.  She loved her children, grandchildren, great-grandchildren, nieces and nephews.  She was often lovingly called “Aunt Olga by the many children who came into her life.

Olga’s passion for service grew as she became active with United Methodist Women at her church in Battle Creek, Michigan.  She went on to be a leader in her annual conference in Michigan. She  was invited to be a Director on the National Board for United Methodist Women. In that capacity, she represented the church at home and abroad.

Olga worked closely with church leaders on border and Hispanic issues.  The Michigan Annual Conference elected her as their delegate to the General Conference, the governing body for the denomination worldwide.  As a member of the National Hispanic Latino Caucus, she was chosen to address the conference advocating for Hispanic issues. She worked tirelessly to bring attention to the many concerns of her Hispanic community.

Olga’s life was one of service to her home church and other churches in Latin America and the Caribbean. She often said she had hoped to serve as a missionary. Indeed, Olga Tafolla was a missionary. Her efforts were a part of positive changes in the life of the church. She responded to the Lord’s call saying: “Here am I, send me.” (Isaiah 6:8 KJV)

“Let brotherly love continue.  Be not forgetful to entertain strangers:  for thereby some have entertained angels unawares.”

Due to COVID 19, Services will be held at a future date to be announced by email, social media, the church website.

Memorial contributions may be made by mail to:

Designate donations as indicated below:

To send flowers to the family or plant a tree in memory of Olga Tafolla, please visit Tribute Store

Share Your Memory of
Olga
Upload Your Memory View All Memories
Be the first to upload a memory!
Share A Memory
Send Flowers