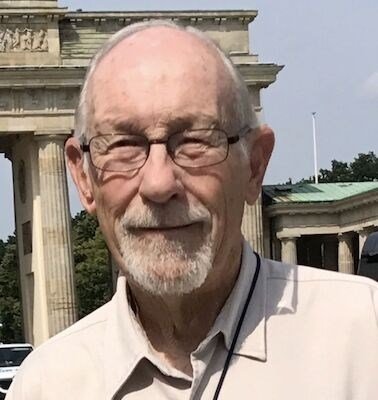 83, of Tucson passed away at home on June 11, 2020. He was born September 1, 1936 to Bernadine and William E. Salisbury in Chicago. Bill graduated from Senn High School and went on to play basketball for Northern Illinois University. He served in the United States Marine Corps where he continued to play basketball. He married Lu Wilson in 1983. Bill is survived by his wife, Lu; his daughters, Shirley Stern (Dan) and Diana McNally (Ian); stepchildren, Cary Fontes (Leonard), John Milton Wilson and Judy Cochrae (Bill) and grandchildren, Marcus Cochrane, Clint Cochrane and Nicole Cochrane. A consummate salesman Bill worked as a food broker and eventually bought Durst Brokerage, a Chicago-based food brokerage which he ran for 20 years. He left behind a legacy of community service while serving as president of every HOA where he was a member. He was founding President of Sunrise Neighborhood Assistance Program (SNAP), and served on the board of Tucson Cactus and Succulent Society (TCSS) for 14 years. During this time he received the President's Service Award. He was chairman of the TCSS Garden Tour for many years setting up tours of members' gardens, including his own. Bill was a dedicated athlete and worked out every day of his life. He was passionate about winning whether playing tennis, ping pong or bocce. He loved all things sports-related (including Michael Jordan apparel) and enthusiastically attended UofA Wildcat basketball games for the last 20 years. A celebration of life will be held at a later date. Donations may be sent to TCSS: P.O. Box 64759 or SNAP: 6890 E. Sunrise Dr. Ste 120-298, Tucson, AZ 85750. Arrangements by BRING'S BROADWAY CHAPEL.

Share Your Memory of
William
Upload Your Memory View All Memories
Be the first to upload a memory!