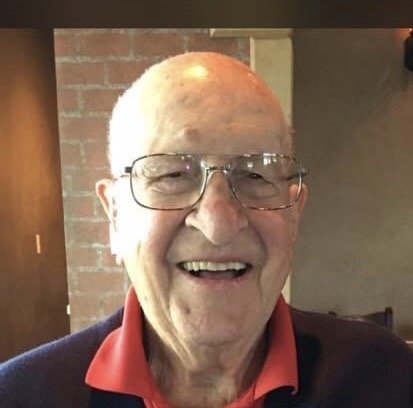 Harold Wilson (Doc) Blanshan, loving father, grandfather and great-grandfather died in the comfort of his home at age 98, on April 30, 2020, after a short illness. He was born to Peter and Hattie “Fern” (Russel) Blanshan on December 11, 1921, in Seymour, WI, the second youngest of six children: Russell, Grace, Dorothy, Ralph, Harold, and Jean.

Who was Doc? His grandson writes, “He was so deeply devoted to his wife, children, grandchildren, and great-grandchildren. Though my grandmother has been gone for 15 years now, he would still cry at the mere mention of her name. She was his heart from the day he first met her. I like to think that at this moment they are locked in a hug that might last a minute.

He helped me learn to ride a bike and woke me up for Saturday morning cartoons. He’d take me on walks down the back road, along with the dog, Lucy. His great passion in life was golf. One could find him at the golf course bright and early every morning up until his 97th birthday; he then went only four or five days a week. His golf buddies knew him as Doc, and he felt golf was a game to not just enjoy, but upon which to continually improve. His great-grandchildren will carry with them the memory of their last visit with him when he turned 97; he took them to the course and gave them a golf lesson.

He’s been an inspiration to me, as a father, a husband, and a human being. His legacy inspires me to be resilient and tenacious. He was born before tv, civil rights, and space travel, when the radio was just becoming a household fixture. He passed as the world was fighting its first pandemic since the Spanish flu. He has always been ahead of his time, putting the needs of others first regardless of race or creed. He never bragged about the wartime medals. If any of the decisions he made as a ranking Air Force officer have had any lasting impact on our society (and I suspect they have), he’s never mentioned it. He always corrected me when he thought I might be acting in a selfish manner. He always has, and always will be a deep source of inspiration to me, and I still have much to learn from him.”

The family would like to thank his good friend, Jamie, whose friendship this past year meant the world to Doc. We also would like to express our gratitude for all the well wishes, cards, prayers, and calls he received from so many family members and friends.

Share Your Memory of
Harold
Upload Your Memory View All Memories
Be the first to upload a memory!