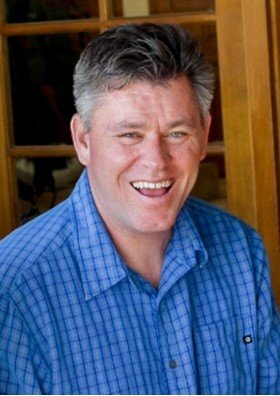 John Thomas Shelby, 50, passed away suddenly on December 22, 2019 of a suspected heart attack. JT, mother’s preferred name, was born to Gail Gebhart and Thomas W. Shelby on April 19, 1969 in Faulkton, SD. The town was so small that the family often joked that JT was born in a barn instead of the small rural hospital. John was born when Tom was in Army boot camp, stationed at Fort Ord during Gail’s pregnancy. Tom returned to SD to bring the little family to Marina, CA to live while Tom served. When JT was two, the family moved back to South Dakota and lived in Sioux Falls and Rapid City.

In 1985, when JT was 16, the family, which now included two siblings: sister, Suzie-3 and brother, Steve-13, and Grandmother, Florence Shelby moved to Tucson, Arizona where --by and large -- he lived, studied and worked until his untimely death.

John started playing the trumpet in 5th grade. He continued to play throughout his childhood. He played in the O’Gorman marching band in Sioux Falls and at Sabino High School, where he first met Amy Loney with whom he reconnected later in life. John graduated from Sabino High School 1987. While pursuing his degree at the University of Arizona, John played trumpet in the Marching & Pep Band. He is remembered as having coined the phrase “nice shot buddy” when an opposing basketball player missed a free throw. This chant can still be heard today at the U of A games.

While an undergraduate, John met Teresa Boden. In 1991 John graduated with a B.S. in accounting. John and Teresa married in 1993. They had three children together and shared their lives for 20 years before divorcing.

John started his accounting career as an auditor for the State of Arizona in Chandler and as an accountant for Maricopa County. John passed the CPA test but, he yearned to follow in his father’s footsteps by earning a law degree.

He achieved this goal when he graduated the U of A Law School in 2000. A gifted and persuasive speaker, he clerked for Mr.

Roger Taylor’s law firm, Taylor & Hillman. He was soon to shed his role as clerk and was hired as a lawyer by Taylor’s firm in 2000. He became a principle partner in the firm of Taylor, Hillman & Shelby in mid-2001 a mere year and a half after beginning as a law clerk. JT had been a bright spirit and a loyal and dedicated estate lawyer to his clients at the firm of Hillman & Shelby until the day he passed.

John was a loving father, who had a lively spirit and had a notorious sideline enthusiasm at many the U of A Wildcat basketball and football games. Just as John was coached in baseball by his father, he shared his father’s love of children and volunteered his time coaching youth soccer. True to his character, he became known as the “fun” coach to play for.

After his divorce, John reconnected with high school friend, Amy Loney and they began dating. At the time of his death, John and Amy were raising their five year old daughter, Fiona, John’s fourth child.

John’s exuded a contagious love of life and his family. He had a sly, quick wit which he attributed to his Irish heritage. If he wasn’t attending the U of A games live, John could be found in front of the TV cheering for University of Arizona teams or the Minnesota Vikings. His enthusiasm for family, sports and life would often spill over to the street outside his home. His monthly poker night with his buddies was another opportunity to embrace the present. No matter what the situation was, John was more than often the life of the party.

John will be greatly missed as a friend, coach, lawyer, son and brother but most importantly as a father.

John is survived by his four children Fiona 5, Kennedy 14, Jenae 18, Taylor 23; his life partner, Amy Loney; his mother, Gail Gebhart Shelby; brother Steven Shelby; sister Suzie Shelby Maki and former wife Teresa Boden. He was preceded in death by his Father, Tom W Shelby who passed away November 14, 2019 – a mere 5 weeks before his own passing.

John Thomas Shelby’s life was brimming with all manner of interests that give life meaning. In the words of that country lawyer, Abraham Lincoln: In the end, it’s not the years in your life that count. It’s the life in your years.

Memorial contributions may be made to the John Shelby Family Fund, to benefit his children’s education. Contribution options:

Transfer via Zelle to: johnshelbyfamilyfund@gmail.com

To send flowers to the family or plant a tree in memory of John Shelby, please visit Tribute Store
Saturday
11
January