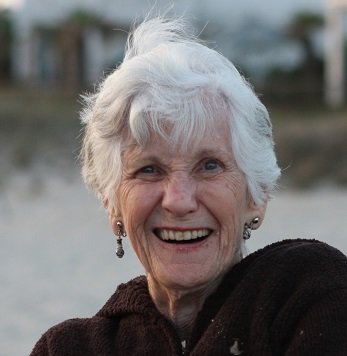 Inez Hahn, born Inez Eugenia Thomas, passed into her eternal rest on Tuesday, December 31, 2019. She was born in Lebanon, Indiana on October 4, 1926. She was born to Joseph and Olive Thomas and arrived a few minutes after her twin sister Imogene! She was raised in Parke County, Indiana and graduated from Union Township High School. Upon graduation she moved to Indianapolis to work. It was there she met a young soldier, Lloyd Johnson. They continued their courtship after he was shipped to Belgium with the 106th Infantry Division in 1944. After the end of the war, Inez and Lloyd were married. They settled briefly in Indiana where their son Tom was born. In 1948 they relocated to the Upper Peninsula of Michigan to Lloyd's hometown of Wakefield. It was in Michigan where they welcomed two daughters, Carol and Melanie. Inez often referred to those years in Michigan as some of the happiest years of her life. In the early 1960s Inez and Lloyd relocated to Arizona. They lived for a time in both Morenci and Globe. In 1966 Tucson became the family's home. Tucson was to be Inez's home until her passing. She grew to love the Southwest and every day she loved looking at the Mountains surrounding her adopted hometown of Tucson. Inez was a social, vivacious, gregarious, and active person, she thoroughly enjoyed managing the jewelry department at Montgomery Wards at El Con until her retirement. Inez enjoyed many friendships and her family relationships. She was an avid gardener, but probably her favorite role was that of being Grandma. In 1976 she married Henry Hahn which blessed her with a step son, daughter-in-law, and four additional grandchildren. Inez has been a member of Holy Cross Lutheran Church since 1966. Her faith and church membership brought her strength and joy throughout her life. She always knew she was a beloved and redeemed child of God and in her last few months she was comforted by the thought of going home to heaven. Inez was preceded in death by her parents Joseph and Olive Thomas, her husband Henry Hahn, her brothers Joe Thomas, and Robert Thomas, her sisters Lucile McClure, and Imogene Martin, her first husband Lloyd Johnson and her stepson William Tierney. She is survived and lovingly remembered by her children; Tom Johnson (Carol,) Carol Trudgen (Craig,) Melanie Monier (Mark,) and daughter-in-law Joan Tierney. She is also survived by her adoring grandchildren; Erica McNeal (Ryan,) Alissa Krusoe (Rob,) April George (Patrick,) Adam Buben, Andrea Monier, Amy Monier, Bill Tierney, Liz Silverman (Phill,) Kate Fermoyle (Chris,) Robert Tierney (Oxana.) Fondly remembering her as G.G. are her great grandchildren; Daisy and Clara Krusoe, Kaylee George, Alyse and Jesse Silverman, Owen and Carter Fermoyle, and Faye and Zoe Tierney. Her funeral service will be held at Holy Cross Lutheran Church 241 N. Harrison Road Tucson, Arizona on Saturday, January 11, 2020 at 1:00. A visitation will be held one hour prior to the service. A light luncheon will be served after the service. If so desired a memorial gift may be made to The Holy Cross Lutheran Church Extension Fund.

To send flowers to the family or plant a tree in memory of Inez Hahn, please visit Tribute Store
Saturday
11
January

Share Your Memory of
Inez
Upload Your Memory View All Memories
Be the first to upload a memory!
Share A Memory
Send Flowers