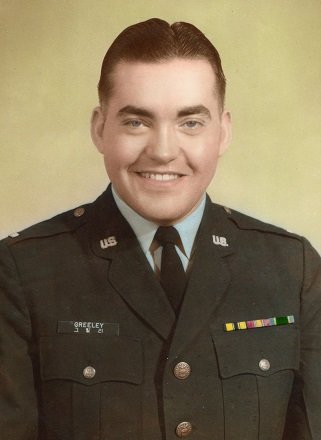 Andrew Thomas Greeley, a 42 year resident of Tucson, Arizona, passed away on December 20, 2019. Andrew was born in Boston, Massachusetts on September 3, 1942.  During his youth, he loved fishing, dancing, and his dog, Lace. In 1960, he attended the University of Miami and joined the Air Force ROTC program, graduating in 1964 with a B.A. in Broadcast Journalism. Thereafter, he was commissioned into the United States military as an Air Force Officer, and he began his career in public affairs. In 1967, he took Rita, a nurse in the Air Force, to a military officer gala and their romance ensued. They were married in 1969 and celebrated 50 years together in June 2019.

As an Air Force officer, Andrew did tours in South Korea, England, and Germany. In 1979, he completed his M.A. in Human Relations from The University of Oklahoma. In 1984, after serving as a public affairs officer for 20 years in the Air Force, his desire to remain in Tucson led him to retire with the rank of Major. Over the next 30 years, he worked in various public relation positions throughout Tucson including ABC Technical Trade School, Borders, Books and Music, and Barnes and Noble. In 2004, he founded Literary Partners Group, LLC, and hosted an accompanying weekly radio program called On The Bookshelf.  This program helped to promote local book authors.

A genuine and enduring affection for Tucson and its community drove him to volunteer for local non-profit organizations. He served on the Board of Directors for the Tucson Boys Chorus, Hermitage Cat Shelter, and Green Chamber of Commerce. Andrew was also intensely spiritual and dedicated his time to the Catholic Church. In 2012, he was ordained as a deacon by the Catholic Diocese of Tucson. Andrew's dry sense of humor, love of books, and passion for Tucson will be deeply missed by his family, friends, and all who knew him

Andrew is survived by his wife of 50 years, Rita Greeley, his three children, Andrew Greeley of Los Angeles, CA, Margaret Dickens(Michael) of Denton, TX, and Michael Greeley of Tucson, his grandchildren Katherine, Christopher, Caroline, and Claire and his nephew, Bernard Shults of Fairport, New York. He was predeceased by his father, Andrew Thomas Greeley, by his mother, Agnes Greeley, both of Boynton Beach, Florida and his half-sister, Ellen Greeley of Buffalo, New York.

There will be a visitation with Rosary at Bring’s Broadway Chapel on Thursday, January 2, 2020 from 5-7 p.m. A Mass will be held on Friday, January 3, 2020 at 9 a.m. at St. Francis de Sales Catholic Church (1375 S. Camino Seco). Burial with military honors will follow at the Arizona Veteran’s Memorial Cemetery (15950 N. Luckett Rd) followed by a reception at St. Francis de Sales Catholic Church at 1 pm.  In lieu of flowers, donations can be made to the Alzheimer’s Association and the Hermitage Cat Shelter of Tucson, Arizona.

To send flowers to the family or plant a tree in memory of Andrew Greeley, please visit Tribute Store
Thursday
2
January

Share Your Memory of
Andrew
Upload Your Memory View All Memories
Be the first to upload a memory!
Share A Memory
Send Flowers