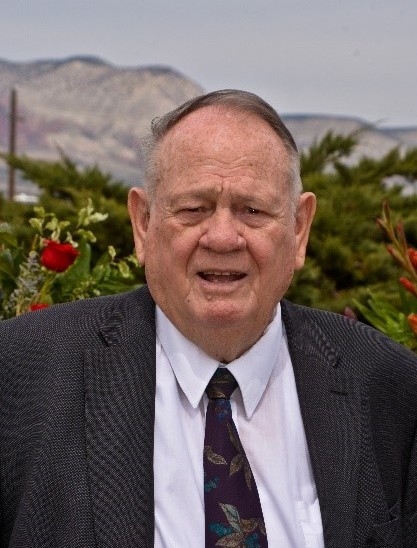 Chad Joseph Cowley returned home to his Heavenly Father on December 10, 2019 after a long illness. He was born June 14, 1934 in his home in Venice, Utah. He was preceded in death by his wife of 54 years, Marilyn Oviatt Cowley. They are together again for eternity and he had a joyful reunion with his parents Anthony Oscar and Irene Cowley, and brothers Merrill (Marva), Ivan (Pearl), and Brent. He is survived by brother Ervin (Jerry), sister-in-law Julie, and children Charlene; Steven; David (Pamela); Curt (Nan); and Richard (Kristie). He has 19 grandchildren, 39 great-grandchildren, and 3 great-great grandchildren.

Chad was a member of The Church of Jesus Christ Latter-day Saints and served in many capacities throughout his life. He was involved in scouting for many years. During his retirement he especially enjoyed being a Temple Worker and working in the Family History Center. He loved spending time with his family, especially his grandchildren and great-grandchildren. He was a Certified Public Accountant.

You will be missed dad/grandpa. We love you.

To send flowers to the family or plant a tree in memory of Chad Cowley, please visit Tribute Store
Monday
16
December