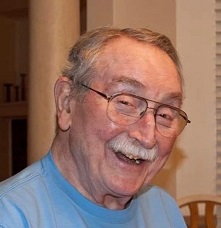 Jim was born in Kansas City, MO on April 25, 1932.  He grew up and attended high school in the Kansas City area, joined the Army and was stationed in Japan during the Korean War, then returned to KC to attend University of Kansas School of Engineering where he graduated with distinction, earning a BS in chemical engineering.

He attended University of Missouri /Kansas City Law School where he graduated first in his class and was Co-Editor of the Law Review.  He was a member of the Order of the Bench and Robe and admitted to practice in several states and before state and federal courts.

Jim moved to the Washington DC area in 1968 and was a resident of Potomac, MD for nearly 30 years.  He was a partner in several patent firms in DC and a longtime associate of the Licensing Executives Society (LES).  Jim was a member of Bethesda Country Club.

Jim is survived by his wife of 62 years, Susan (Perkins), his daughters Elizabeth Burkholder, Caroline Atkins (Mike), and Jennifer Bohne (Kevin) and his grandchildren Katherine and Sarah Burkholder, Jamie Atkins Lacey and Rebecca Atkins, and James and William Bohne.  He was recently preceded in death by his loving granddaughter Carrie Anne Holt-Atkins Samuel.

He is also survived by his brother Dr. Fred Marsh and numerous great grandchildren, nieces and nephews.

Jim was a lifelong Jayhawks fan.

Memorial donations may be made to the Wounded Warriors Project.

To send flowers to the family or plant a tree in memory of James Marsh Jr., please visit Tribute Store
Thursday
5
December