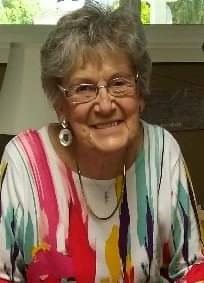 Clara Joan (Goslinga) Van Gelder passed into her eternal glory on Nov. 2, 2019. She was born on Nov. 24, 1932 in Sheldon, IA. She attended country school through the 8th grade. On Dec. 26, 1951 she married Wilbert James Van Gelder. They moved to Pennsylvania while Wilbert finished Basic Training for the U.S. Army. Upon his return from Korea, they moved to Sheldon , IA. They began farming and lived first in rural Carnes, IA; then rural Hospers, IA; and in 1977 they moved to Rock Rapids, IA. They spent many winters in Mesa and Apache Junction, AZ and finally moved to Tucson , AZ in 2010.

As a young lady, Clara helped out many new mothers with in home care, and over the years worked part time at JC Penney, Jay’s Motel and The Flower Village. She was a lifelong member of the Reformed Church in America, but most recently attended Immanuel Presbyterian Church in Tucson. She enjoyed being a homemaker and taking care of her family, loved Gospel music, never missed attending her children’s and her grandchildren’s school and church programs, and was a member of various groups, including church circle groups, Sages and The Red Hats.

Survivors include her husband of nearly 68 years, Wilbert, her children and spouses, Bob and Carol Van Gelder of Tucson, AZ, Loren Van Gelder and Kathy Kramer of Grove, OK, and Pam and Jon Kragt of La Vista, NE; seven grandchildren, 6 great-grandchildren; two sisters, Sylvia Henning and Betty Roos and many special nieces and nephews. In addition to her parents, she was preceded in death by three brothers, Stewart, John Jr. and Erwin Goslinga and one sister, Elizabeth.

Public viewing will be at Bring’s Broadway Chapel from 4-6 p.m. Wednesday, Nov. 6th. Following a private burial, the Celebration of Life Service will be held at Immanuel Presbyterian Church in Tucson, AZ on Nov. 7th at 1:00 p.m.

In lieu of flowers the family requests that donations be directed to Sunshine Acres in Mesa, AZ.