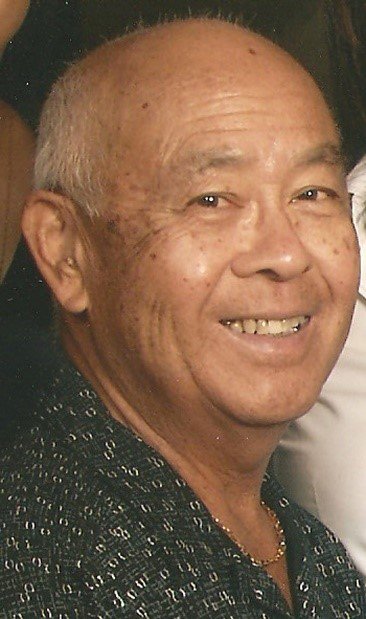 Our beloved Thomas (Tom) F. Dang, SMSGT USAF, Retired, left to be with our Savior on Saturday, September 14, 2019.

Tom was born on February 21, 1932 in Maui, Hawaii, of Chinese immigrant parents, and was the second son and 7th in line in a family of nine children. His parents taught their children to be staunch and loyal US citizens, and to take great pride in being Americans. His parents brought them up to be devout Catholics.

He was nine years old when Pearl Harbor was bombed, and a paper boy and a shoe shine boy, shining the shoes of Marines destined for the Pacific Theatre. He vividly remembered when the remaining Marines passed back through Hawaii, and the deep sadness of learning that those who had been especially kind to a little shoeshine boy, whose names he had memorized, “didn’t make it”. At a young age, he learned a deep and abiding respect for US military service members and our country.

He joined the Air Force in 1951, and went to boot camp at Hickam AFB in Hawaii. He married the love of his life, Elaine Perry from Lanai on April 19, 1953, and over the years had five children, Terri, Cathy, Patty, Nina, and Tommy.

His military service was distinguished, and he showed his family the adventures and responsibilities of living all over the world. He received orders to Vietnam, where he served with great honor and commitment. During his time there, his private passion was providing time and donations to the orphanages of abandoned Amer-Asian children, because he said they looked like his children.

After Vietnam, the family moved to Davis-Monthan AFB, where he retired as a Senior Master Sergeant after 28 years of service. For his second career, he worked in civil service until his final retirement. Tom went to night school to earn his degree, and enjoyed travelling with his wife and her Senior Olympics Softball Team all over North America. He loved living vicariously through her adventures.

His last few years were spent with daughter Cathy and husband, Tim, so he and Mom could be comfortable and cared for in their golden years.

He is survived by his wife of 66 years, Elaine, and his five children: Terri (Peter) Eckland, Cathy (Tim) Peck, Patty (Dan) Varner, Karen (John) Pietsch, and John Thomas, his son. His grandchildren include Kimmy (David) Brednick, Michael (Cynthia) Dang, Kevin (Melissa) Varner, Kyle (Jessica) Varner, Ruarke Brandeburg (Alena Berume), and Becky Eckland. They were all lucky to grow up knowing their grandparents. His great-grandchildren adored him, and include Lilly, Noah, and Logan (Kevin Varner), Hayden and Ashton (Kyle Varner), and Ruarke Thomas Dang (Ruarke and Alena). He is survived by his sisters Catherine, Mary, Joan, Dorothy, and Sharilyn, and a large extended family who all remember him for his love, kindness, and generosity.

His devoted and loving parents, Wing Dip and Fung Tai Dang, sisters Agnes and Rose, brother Joe, and all the people he has touched who have passed on before, have made a place for him in Heaven.

Tom supported St Jude’s Hospital for Children, among many other charities. The family requests, in lieu of flowers, a donation to St. Jude’s, in memory of Thomas F. Dang.

To send flowers to the family of Thomas Dang, please visit Tribute Store

Share Your Memory of
Thomas
Upload Your Memory View All Memories
Be the first to upload a memory!
Share A Memory
Send Flowers