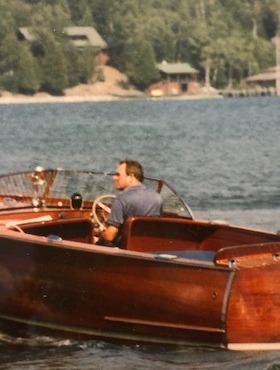 Bill passed away peacefully at home in Tucson Arizona on July 21st 2019 at the age of 86. He was survived by his brother, John D. Cummings of Saginaw MI, niece Christine (Verny) Solis of Saline MI, nephew Addison Cummings of Breckenridge CO and 4 great nieces. Bill was preceded in death by his parents Letha and William Joseph Cummings, Sr (Sault Ste. Marie MI and Hendersonville NC) and his sister-in-law Carolyn Cummings. Bill was born in Sault Ste. Marie MI and treasured a lifetime of summers at the cottage in Cedarville MI and boating the waters of Lake Huron in and around the Les Cheneaux Islands. He was a devoted member of the Catholic church, attending Campion Jesuit High School in Prairie Du Chien WI and graduating from University of Detroit, Detroit MI, with a Bachelors of Science degree in finance in 1955. More recently, he was a member of the St. Thomas the Apostle Parish in Tucson.

As a devoted patriot, Bill was commissioned as a Second Lieutenant and entered active duty in the United States Air Force in 1955. His principle permanent duty assignments were as a B-47 Navigator at Biggs Air Force Base, TX; a B-52 Radar-Navigator at Seymour Johnson Air Force Base, NC, and Loring Air Force Base, ME; a C-130 Maintenance Officer at Davis Monthan Air Force Base, AZ; a Manpower Specialist at Osan Air Base, Republic of Korea; and two tours of duty with the Davis Monthan SAC Management Engineering Team. His foreign service included duty in Southeast Asia and the Republic of Korea. Sergeant Cummings retired in the grade of Major with 20 years, 2 months and 25 days of active service. His awards and decorations included the Air Force Commendation Unit Award, the Combat Readiness Medal, the Air Force Good Conduct Medal, the National Defense Service Medal, the Armed Forces Expeditionary Medal, and the Vietnam Service Medal with two Bronze Stars, and the Air Force Longevity Service Award with four Oak Leaf Clusters.

Through his retirement, Bill resided in Tucson AZ surrounded by a dear group of friends. He was described as a true patriot and generous man, devoted to the U.S. Military, veterans and to protecting the freedoms designed by the U.S. Founding Fathers. Bill was quick to help a friend in need and loved by many.

A memorial service is planned for Wednesday, July 31st, at 1pm at the Veterans of Foreign Wars Post 549 at 8424 E Old Spanish Trail, Tucson, AZ 85710, Chaplain Derek Elliott officiating, with full military honors by the Davis Monthan Base Honor Guard.

To send flowers to the family or plant a tree in memory of Major William Cummings, Jr., please visit Tribute Store
Wednesday
31
July

Share Your Memory of
Major William
Upload Your Memory View All Memories
Be the first to upload a memory!
Share A Memory
Send Flowers