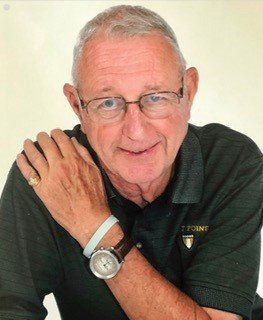 Arthur Wilbur “Art” Meyer, Lt Col, USAF (Ret) passed away on 22 May 2019 at the age of 85.  Art was a ’58 West Point graduate, a bomber and transport pilot, a decorated veteran, a civil engineer, and a Professor.  He was also a beloved father and grandfather.  He survived his wife Sue Ann Meyer (Schwanbeck), and daughter Jill Moravec (Jon).  He is survived by his son Scott Meyer (Donna), his daughter Janet Kasmer (Jim), three grandchildren Austin Kasmer, Aaron Moravec and Julia Moravec, best friend Ken Cousino, and his partner Phyllis Cavender,

After raising three children at various locations across the country and ending up in Bellevue NE, Art and his wife Sue (who passed in 2009) decided they had enough of the cold winters and moved to Tucson in 1991.  They became proud members of the Rolling Hills Golf Course and frequent patrons of the Niblick Restaurant.  They enjoyed their semi-retirement and retirement years nearby until they passed.

Art was born to Adolph and Adelaide Meyer (Schroeder) in Brooklyn on 21 March 1934 and raised in New Hyde Park on Long Island, which even after 61 years away would still come as no surprise to anyone who spent any time with him.  He graduated Sewanhaka High School in 1951.  After earning his first college degree (Associates) in New York and spending the summer as an Aviation Cadet in Texas in 1954, Art decided it was prudent to serve his required military service as a commissioned officer.  He pursued and accepted an appointment to the United Stated Military Academy where he graduated, was commissioned and earned his second degree (B.S.) in 1958.

He was announcer on KDET “radio” for the West Point hockey team when the love of his life, Sue Ann Schwanbeck, walked into the booth with a classmate.  The details after that fateful day are murky. However, they were married at West Point Chapel on 5 June 1958…..the day after Art’s graduation.

Art chose services wisely and proceeded to finish pilot training at Vance AFB, TX.  He flew B/WB-47s, C-124s and C-141s.  He earned his third degree (M.S.) at the Air Force Institute of Technology in 1976 and served the remainder of his Air Force career as a Civil Engineer.  After his retirement from the Air Force in 1979, Art earned his fourth and final degree, a Doctorate in Civil Engineering, from the University of Nebraska.  He taught engineering courses at both the Universities of Nebraska and Arizona until he fully retired.

Art and Sue enjoyed 51 years of marriage that included travel and many adventures, often around a golf course or on a cruise ship.  They took great pride in the children they raised together and their grandchildren.  They also cherished family, catching up with Art’s classmates at West Point Reunions and the friends they made as they moved around the country and settled in Tucson, especially those who brought over a cocktail or a good bottle of wine.

Art had the great fortune of meeting Phyllis Cavender after Sue’s death.  They continued his love of class reunions travel and exploring together.  She was a wonderful partner.  She, his surviving children, grandchildren, relatives and friends will miss him very much.

In lieu of flowers, donations can be made to St Jude’s or West Point Association of Graduates.  A Memorial Service will be at Tanque Verde Lutheran Church on 13 July at 12:00 PM with a reception to follow at the Niblick, Rolling Hills Golf Course at 1:30 PM.

To send flowers to the family or plant a tree in memory of Arthur Meyer, please visit Tribute Store
Saturday
13
July

Share Your Memory of
Arthur
Upload Your Memory View All Memories
Be the first to upload a memory!
Share A Memory
Send Flowers