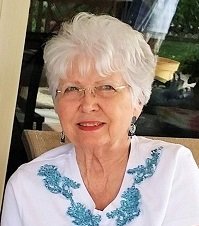 Shirley was raised in Carlsbad, NM until 1947 when her family moved to Carlinville, IL for 5 years before returning to Carlsbad. She was a secretary for Joy Mfg Co. when she met Bill in El Paso. They were married at St. Edwards Catholic Church on 18 Sept 1954. Bill’s construction jobs moved them around until they finally settled in Tucson, AZ. She enjoyed her life as wife, mother, grandmother and great-grandmother. She had a zest for life filled her hours with home-making, sewing, knitting, crafts, cards and genealogy. Bowling brought many honors. Her passion for square and round dancing brought many dear loving friends into her life. Her loving husband, Billie Gay, of 54 yrs preceded her in death on 2-17-2009.

She will be deeply missed by her 3 children: Kayleen, Bryan and David; 4 grandchildren: Kristina (Shane) Foster (Meridian, Idaho), Felicia Gay(Tucson) and Jennifer (Jon) Roloff, Adam Gay, (both of Sacramento, CA) and 7 great-grandchildren: Matthew and Isabella Roloff; Trinity and Kaylee Foster, Rylee, Connor and Marilynn Gay. Also, her brother Mark (Lavone) from Gay, GA. Her sister Toni Rea preceded her in death May 21, 2016.

To send flowers to the family or plant a tree in memory of Shirley Gay, please visit Tribute Store
Monday
10
June