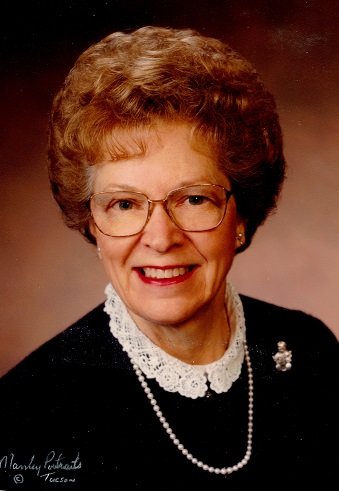 For decades, Christmases on the TMC campus included Santa-capped saguaros and the Shropshire-hosted festive annual Open House, where Mary Ruth and Don greeted each guest with Southern-seasoned cheer and a mug of Mary Ruth’s hot wassail.

Mary Ruth, an elementary teacher who held certificates in four states, served as a Christian youth leadership trainer, was an avid storyteller and devoted mother of two—Melanie and Devin, who cherished the joy of entertaining and provided stability for her husband of 64 years, TMC’s President Emeritus, Don Shropshire.  Mary Ruth passed away at Peppi’s House on April 16, 2019 at the age of 92.

Mary Ruth Bodenheimer was born the middle child of four in Kernersville, North Carolina, where she sold chicken eggs and waited tables to earn her way through college.  She graduated from Campbell and Woman’s College at UNC in 1948 with an elementary teaching degree, and served with the Baptist Student Union in North Carolina, where she met her future husband, Don. They were married in Atlanta on August 19, 1950.

An early lifetime highlight was meeting and being mentored by Ralston Purina founder, William H. Danforth, who ultimately shaped Mary Ruth’s desire to pursue youth leadership training at several churches in five states through the years where she served in Christian education leadership. She was awarded Catalina Baptist Church’s “Shining Star” award in Tucson, and was the recipient of Rotary’s prestigious Paul Harris Fellowship.  Another lifetime honor was the privilege of being introduced to Pope John Paul II in 1987 prior to her husband’s private audience meeting in the Erickson house on TMC’s campus. In the 1980s, Mary Ruth was thrilled to host international storyteller, Jackie Torrence, in her home.

Both Mary Ruth and Don loved the opportunities in giving back to their community—each in their own way.  Encouraged by her family, Mary Ruth desired to share her passion of literature and storytelling with others including her two young granddaughters, Ashley and Carrie with grandson, Sean. She attended national storyteller seminars and served as president/founding member of Tucson’s Tellers of Tales.  One of her stories was professionally recorded on a CD through the organization. For over 30 years, she volunteered at several schools including Whitmore Elementary, north of TMC, where children excitedly sat, legs crossed, all ears, as “Mrs. S.” told a ‘story from her brain.’  Her favorites included both original and classic Halloween, Thanksgiving, Valentine and Native American animal stories—which always included a valuable moral lesson for all.

On special occasions, Mary Ruth was honored to share a story or two at TMC’s Auxiliary luncheons with her husband proudly beaming at her side.  She also joyfully and skillfully entertained many at TMC’s Women of Honor bench ceremony in 2015 with her signature story, “My Pet Rattlesnake.”

A joyful celebration of Mary Ruth’s life service is scheduled at her home church, Northminster Presbyterian, on Saturday, June 1 at 11am.  In lieu of flowers, donations gratefully accepted to Tellers of Tales, a local non-profit organization for which Mary Ruth was a founding member (http://tellersoftalestucson.com/).

To send flowers to the family or plant a tree in memory of Mary Ruth Shropshire, please visit Tribute Store
Saturday
1
June