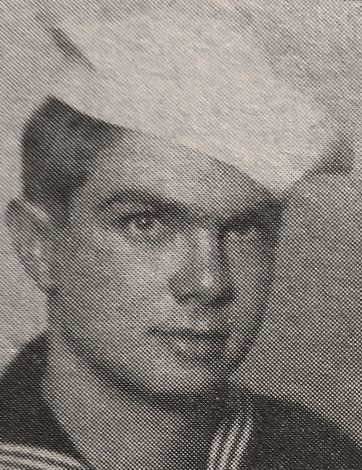 Daddy Leaves behind 2 daughters, Kevilee and Karen and 2 sons, Robert and John. Grandchildren Nathan, Nicole, Robbie and Amanda. Great-grandchildren Caillin, Laikyn and Ezra. Roger grew up in Grayville, IL on ‘Cow Hill’. His parents, Rev. Edwin P. Schaich and Nellie Schaich lived nearby ‘Grandma Schaich’ and dad got to know her very well. He had a dog named Jack who, he thought of often even during his last days Dad went to grade school in Grayville, IL and Graduated High School from Allendale, IL. . According to dad’s 6th grade score card he was very good at Spelling, Reading, Citizenship and had excellent Deportment. His first year of college was spent at Transylvania College in Lexington KY on a Tennis Scholarship from Allendale High School. He then joined the United States Navy in December of 1942. Dad spent his Navy years in the Pacific theater on a destroyer – the U.S.S. Shaw DD 373 as Sonar Man Second Class. Sometimes he also filled the role of Helmsman. Dad fought in most if not all the sea battles around the Philippine Islands, Saipan and other places there in the Pacific. Dad was in the last sea battle of WWII. He also was Honor Guard for President Harry Truman. After the war, dad attended college at Eureka College in Eureka, Ill. He was part of the same Fraternity as President Ronald Regan. Dad went to WV to be near his parents while his father was pastoring at a Christian Church in Moundsville, WV. There he met my mother, Lorraine. Lorraine and he moved to Illinois and had 3 children – Kevilee, Robert and John. I remember daddy out by my little blue swing set in Eureka, catching fire flies with me in the evening – poking holes in a jar lid and letting me take my sparkly little friends to my room at night. Dad was a very good salesman for Fedders Corporation in Peoria, IL, selling air conditioning and heating to resellers. When I was a young girl, I sometimes went with him on the shorter trips. He always knew the very best little restaurants! Throughout the years, dad always was watching over me. The years when I was not a cooperative child, he still believed in me. He was always my champion. In later years, dad lived in Olney, IL and was the organist at the First Baptist Church, taught Sunday School there, and was secretary for the Kiwanis Club. He opened a small music store – J & R Music in Olney and tuned pianos in the area. Dad loved to go deer and squirrel hunting on the Wabash river with his best pal Loren. Loren built a deer stand along the Wabash and it is likely there still. In August 2015 dad traveled his last big road trip from Olney to Tucson with his daughter, her husband Steve and their German Shepherd Dog Colt. Dad was very interested in biblical history. He read the bible regularly and he loved the Lord. A faith he was not embarrassed to share. How do I summarize a great life well-lived in just a short little article? A rhetorical question I suppose, as I cannot find the words to do so. I can say that the Lord knew what He was doing by giving me this wonderful father. And I have no doubt that after his last breath he heard these words ‘Well done, good and faithful servant. Welcome home.’ I miss you daddy. But I will see you again before to long. Sing with the Angels.

To send flowers to the family or plant a tree in memory of Roger Schaich, please visit Tribute Store
Monday
15
April