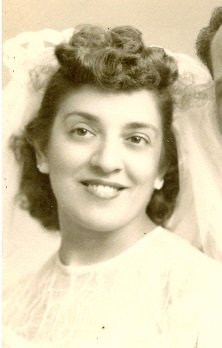 Shortly after her 101st birthday, Angela Leto of Tucson peacefully passed on March 8, 2019 with members of her family by her side. Angela was born in Brooklyn and was the youngest of 6 children of Italian immigrants, Antonio and Leonarda Dazzo. Called "Angel" by her family, Angela was true to her nickname: she was kind, sweet and much beloved by her family and friends. Angela adored her sisters and brothers and is now happy to join them. Angela lived in Brooklyn until her family moved to Valley Stream, NY, in 1939. Angela proudly attended Girls Commercial High School but did not graduate. She entered the work force and was happy to work in the fashion industry at Madam Mathilde.

Angela married Anthony S. Leto in 1946. The couple was well matched as Anthony was outgoing and Angela was quiet. The couple lived in Astoria, Queens, until 1958. Angela helped care for her father in law who passed from cancer in 1953. Angela also helped her husband and brother in law, Joseph Leto, start Lido Glove in Manhattan, NY. Angela worked in various jobs while raising 3 children, who she loved dearly. All her employers loved her; her favorite job was at Arverne Bakery because she could bring home freshly baked goods that her family enjoyed. Her last job was at Unity Sewing Machine Parts in accounts receivable. She loved this job because she spoke to people all over the country and world; she loved to talk to people with different accents and customs.

Angela lost her daughter Mary in 1999 and her husband in 2013. She was profoundly saddened by her daughter's passing to cancer and it greatly impacted her otherwise optimistic view of life. Angela is survived by sons Anthony J (Susan) and Frank (Margaret) Leto. She is also survived by grandchildren Lucas Leto (Layla Genser), Graham (Jessica) Leto, and Chloe (Kevin) Coetzee. She is also the proud great grandmother of Grayson Leto, born in 2018. Angela also loved and is beloved by many nieces and nephews in Tucson and around the country.

Visitation is on Thursday March 14 from 5 pm to 7 pm at Brings Broadway Chapel. A brief service will be held Friday March 15 at Holy Hope Cemetery at 1 pm. In lieu of flowers, the family requests donations be made to your favorite charity.

The family wants to especially thank the staff at Pacifica Senior Living and TMC Hospice for their compassionate and attentive care of Angela.

To send flowers to the family or plant a tree in memory of Angela Leto, please visit Tribute Store
Thursday
14
March