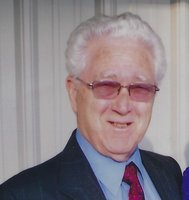 Revelation 21:4 And he will wipe out every tear from their eyes, and death will be no more, neither will mourning nor outcry nor pain be anymore. The former things have passed away.”

Larry Hassebroek was born February 13, 1932 in Watertown, South Dakota. Larry was the first child of Lloyd and Opal Hassebrock’s 3 children.

Larry’s family moved to Rapid City when he was a young boy. He lived there until he graduated from Rapid City Central High School. After High school he joined the Air Force.

Larry Met and Married his first Wife Mary in Rapid City in March of 1956. Larry was going to re-enlist in the Air Force in Tucson when his Wife Mary ended up with Desert Fever, He was told to take his wife back to South Dakota. He received an Honorable Discharge from the Air Force.

Their first child David was born in 1957 In Rapid City, in 1959 the second child Lawrence was born also in Rapid City. In 1960 Larry moved the family to Miles City, Montana while he was working on road construction. Their oldest Daughter Kimberly was born there in 1960. In 1960 Larry learned that he needed to change his life style due to learning Bible Truths. His Wife Mary started to Study the Bible with Jehovah’s Witnesses, Larry would not join in on the studies but would ask Mary to ask questions he had. One day Larry was there when they came and asked his own questions. He as a result found out that what he was learning was the truth and accurate from the Holy Scriptures.

Larry not long after that moved his family back to South Dakota and continued to learn about the bibles promises and the hope for the future it foretells. In 1963 Kent the 3rd Son was born in Rapid City.

The Family continued Progressing in learning the bibles truths and Larry and Mary dedicated their lives to Jehovah and were baptized in 1964.

Larry worked for John England and Sons as a mechanic until about 1964 when Larry became a delivery man for Old Home Bread this was located across the street from their house at that time. Later this job took the Family to New Castle Wyoming in 1969 until 1972.

During this time Larry was privileged to attend the Bible School for Elders in Chicago (the first of many) in 1971.

In 1972 Larry took his family back to Rapid City where 3 years later in 1975 Nicole the youngest child was born.

He moved to Freeport, IL in 2000 where he met and married his second wife Betty. A few years later they moved to Florida. In 2015 they moved to Tucson, This was a place that Larry often spoke about living in.

During his life he has as one of Jehovah’s Witnesses helped many to learn about the promises in the bible, He has also developed many friendships with people everywhere he has lived and is loved and remembered as a peace maker and a person with a great sense of humor.

Larry was preceded in death by his parents and by his first wife Mary.