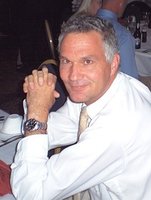 Gregory Scott Carder was born on January 9th 1968. He passed away unexpectedly on February 7th 2021 at 53 years old.  Greg was a very social person that loved sports, especially basketball and football. He was a loyal University of Arizona sports fan and attended football games with his parents for 24 years. He also had the amazing opportunity to meet some of the UA basketball players and Coach Olsen, and it meant the world to him. Additionally, he was very excited for every game and always knew many facts about the players and recruits.

As an employee at Frys grocery store for 25 years, where he met so many friends, he made sure that he was always on time and put in a hard days work. His work ethic was admirable. He also enjoyed bowling and was on several leagues with his dad. He even had a trophy for bowling a 300 game. But it wasn't just about the game itself, as much as it was about connecting with others and playing on a team.

In his younger years he was able to play on his high school basketball team as well as participate in the Special Olympics as a cross country skier. He took a trip with his parents to Reno for a S.O. national event where he won metals and met celebrities. Greg also had an appreciation for music and dance. He had his own signature moves and his favorite band was NSYNC with Justin Timberlake.