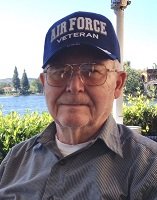 Carl Stephens Gregory, Sr., 86, went peacefully to Heaven with his family by his side on Tuesday, April 9, 2019. He is survived by his daughters, Linda King (Ron), Wanda Narsai (Sunil), and Judy Gregory (Sean Talaee); grandchildren Amanda Aragon (Brian) and Brian King (Katrina Reese); great-granddaughters Ramona King and Layla Aragon; and his many nieces and nephews. Carl was predeceased by the love of his life, Lily Gregory, and only son, Carl Stephens Gregory, Jr. (Steve).

Carl’s life journey began in Lumberton, North Carolina, where he was the youngest of 6 children. He enlisted in the Army at the age of 18, and met his beautiful wife, Lily, while stationed in Sendai, Japan. He transferred to the Air Force soon after. During his military service, Carl was stationed to Japan, Northern California, Africa, Florida, Japan (again), Virginia and retired in Tucson, Arizona. After retiring from the Air Force, Carl worked as a civil servant on Davis Monthan Air Force Base and drove the Choo-Choo Train.

Carl had a great sense of humor and loved to listen to music. He also played golf frequently in his younger days and had a wicked softball slow pitch that won base championships.