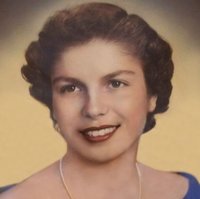 Mary Jeanette Vayre (Foley), Tucson, AZ (formerly of Bay City, MI) went to be with the Lord on March 4, 2019 surrounded by her loving family.

Born in Bay City, MI on August 2, 1931, the only child to Lewis and Dorothy (Schuman) Foley.  Mary was raised on the farm where she made beautiful childhood memories. She graduated from St. Mary’s Catholic High School in 1948.  She married the love of her life, James Walter Vayre on April 19, 1952.  They were blessed with 10 beautiful children and helped raise many more.  Before Jim’s passing in 2002, they celebrated 50 years of marriage.

Mary began her career at Garber High School in 1974 and was known as “Ma Vayre” not only to her children’s friends, but to the teenagers at Garber where she retired in 1988 and moved to Arizona.  She began her second career as a successful Realtor in Green Valley, AZ in 1989 until they moved to Tucson in 1997.  Mary worked her later years in life at Fry’s grocery store as a Greeter until her 80th birthday.

We mourn the loss of our beautiful mother, grandmother, great-grandmother, friend and gentle soul.  Mary’s passion in life was her family, where faith and unconditional love was above all else.  We now celebrate her legacy. We miss her dearly. “I LOVE YOU MORE”

A Mass of Christian Burial will be held at St. Ambrose Catholic Church, 300 S. Tucson Blvd. Tucson, AZ. on Friday, April 12.  A Rosary will begin at 10:00 am followed by Mass at 10:30 am. A celebration of life will immediately follow.  In honor of Mary, remembrances can be made to your local homeless shelter.